Opera and Webkit pass Acid3 test. Does anyone care?

Big news all around the Internet that a nightly build of Webkit and an internal build of Opera have passed the Acid 3 test. Users who favor one of the browsers now fight over the right to state that their browser passed it before the other which is in my opinion completely irrelevant.

Who cares which browser was able to pass the test as the first browser ever ? Who actually knows what the Acid 3 test does and what it means if a browser passes it ? Passing that test does not mean that the browser is able to display all websites correctly. Far from that. All that it means is that the browser is able to pass this test, nothing more, nothing less.

Don't get me wrong. It's nice that the browser developers are making an effort to pass the test but guys, it's just a test. The developers have a right to be proud of it but the users ? If you want to test your browser just visit the official Acid 3 website.

Here is Opera's Acid3 test result as of today. The test has been run with Opera 11.60. 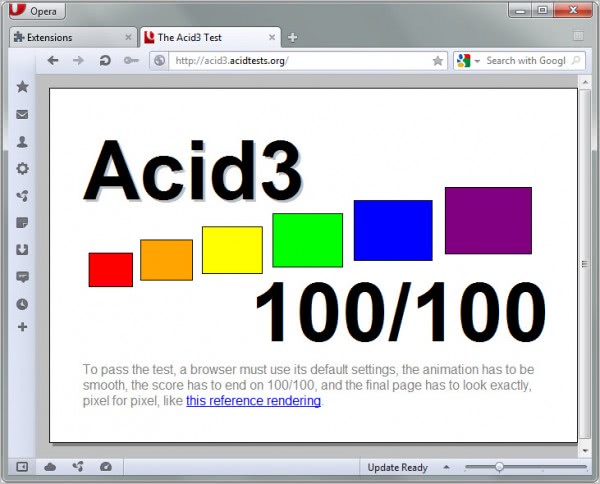 The Acid3 test in its current form is no longer a distinguishing factor. It basically has been replaced by other tests, for instance the HTMl5 test, various JavaScript and general browser benchmarks.

Considering that HTML5 is not that widely used on today's Internet, it is fair to say that the new browser test tells users more about a browser's future compatibility than current one.