Many rumors have emerged when it became public that the Opera team created a website that announced something called Opera Dragonfly without revealing what it really was at that time. The page remained untouched for some time until today. It has changed and Opera Dragonfly is apparently a Opera products mailinglist.

At least that is what you get when you visit the website. You can signup for the Opera products mailing list by entering your name, email and a rather hard to read captcha. They also have a definition of a Dragonfly on that page, it reads: "A fast-flying long-bodied predatory insect of the order Odonata, suborder Anisoptera. Valued by humans for their ability to spot and hunt down harmful bugs from great distances."

You will receive an email after signup which will tell you that you successfully subscribed to receive email updates on Opera product releases. I'm not sure what to make out of this, definitely not what I or anyone else have expected.

Update: Some of my readers pointed out that it could also be a way to increase usability and be a notification list when the real Dragonfly product will be released. Since there is zero information on this topic we are left to a guessing game though.

Update 2: You can run Opera Dragonfly directly from within the Opera desktop client. The easiest way to do just that is to use the Ctrl-Shift-I shortcut to do so. 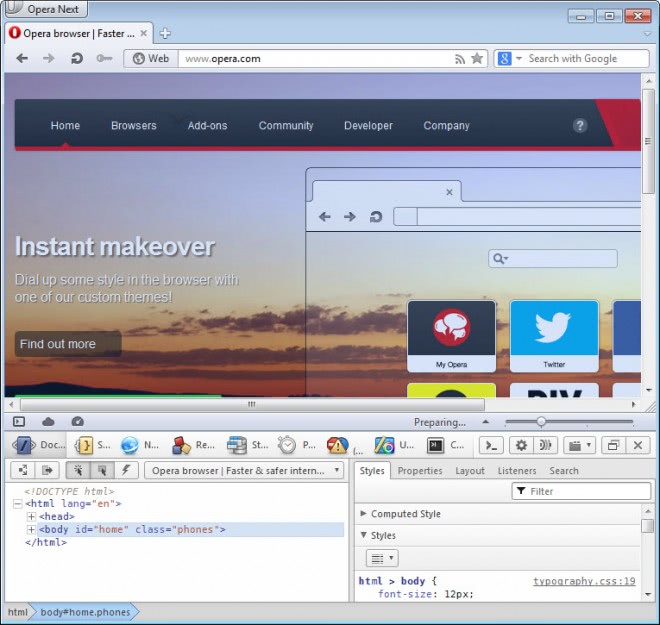 The interface is then displayed at the bottom of the Opera window. The left pane displays the page's source code, the right style information. You can however use buttons at the top to switch to other displays including network information, resources, or the stored cookies and the date they expire.