Windows XP keeps track of how many times an application has been started by a user of the system and displays the most frequently used programs based on the recording in the start menu.

That's a pretty convenient feature for some users but there is no obvious way to control which applications are listed in the start menu.

It does not make sense in my opinion to have a software like Notepad in that list because you normally open it automatically when clicking on a text document.

It is possible to disable that feature altogether but that's probably not wanted all of the time.

The XP Run Count Editor lists all trackedÂ  applications giving the user the option to change the Run Count value of select applications to display them in the start menu or remove them from it. 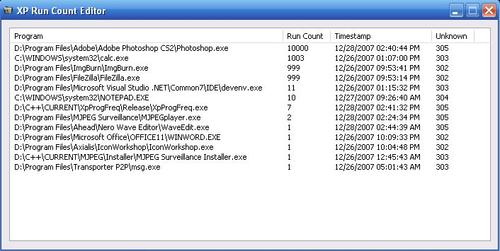 You can increase or decrease the Run Count of an application so that it appears on a specific position in the start menu. The highest value will of course appear on the top of the frequently accessed programs list while lower values appear at the bottom.

If you want to get rid of this feature completely you right-click the Start Menu and select Properties. The Customize button opens a new window where you can set the number of programs that will appear in the list. If you set that value to 0 no programs will be listed.

Update: The developer website is no longer available, it returns a parking site that is in no way related to the program.

We have uploaded the latest working version of the application to our own server. You can download the program which only works under Windows XP with a click on the following link: xprun.zip

Users who are looking for an alternative can use CCleaner to clear the information in the operating system. While it does not offer editing capabilities, it comes close to the original program's functionality.

Note that you get better control over what is displayed in the start menu in newer versions of Windows.