The Internet offers several ways to view TV with your computer. Some TV stations offer TV shows on websites, some via download clients or media players.

Then we have independent companies that offer TV clients like Joost, Bablegum and Zattoo plus all those Asian P2P clients that stream TV - most of the time in Chinese - to your computer.

And then there is another possibility, local stations. Most of those stations are independent stations that offer their TV program as a stream on their website.

Any TV is a client that pulls a list of available channels from a server and makes them available in the client.

You should not expect top TV shows or movies but you can find interesting channels none the less.

Besides lots of local news stations plus CNN and some global ones you find a wide variety of channels that you can sort by country of origin.

There are a lot of channels from the United States and the listing is divided into several folders. They are sorted by state and by alphabet. Quality depends largely on the TV station or network but can be compared to other clients, it's definitely better for most stations than YouTube quality for instance. 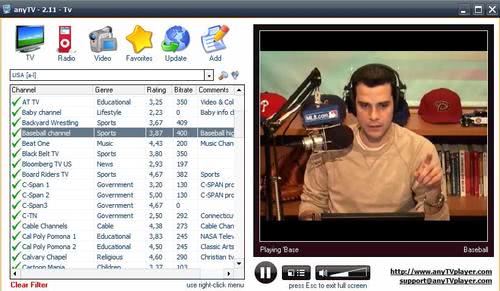 Any Tv offers Radio Stations and Video Clips as well. I do prefer Shoutcast for the first though and video portals or Miro for the second.

I suggest you try the alternatives listed in the first paragraph of this article as they provide excellent value and are free to use. Some may however be limited to some countries only.

Update 2: Any TV has not been updated since 2007 which is a strong indicator that program development has been abandoned.  Check out our online TV guide for alternative options.

Previous Post: « HBO on Broadband soon coming to a computer near you
Next Post: How many video players do we need ? »