Windows has no option to change -- the rather large -- desktop icons to small ones like the option that is available for folder icons in Windows Explorer.

Update: Newer versions of Windows ship with options to change the size of desktop icons. Right-click on a blank location on the desktop and select large, medium or small icons from the view menu. This works in all recent versions of Windows including Windows 7 and Windows 10.

I was looking for SetShellView, a software that a friend recommended, and discovered that it is only compatible with Windows 2000 and not recent versions of Windows. It shipped with options to change large desktop icons to small icons or even to list views instead of icon views.

Deskview was one of the programs that I found mentioned in this article that introduces the functionality to Windows XP and Windows Vista.

The program is tiny, it has a size of 11 Kilobytes and the only thing it does is change icons from large to small. Please note that icons remain this way only for the session. If you restart the system or Explorer crashes, you get the large default icon view again on the desktop.

If you want to use it permanently, you may want to consider adding it to the startup folder so that it is run on the start of the system.

The behavior in Windows Vista is a little bit different though. Instead of reducing large icons to small icons it just reduces the space between icons. Take a look at the two screenshots below to see how that looks. 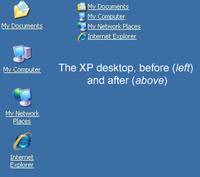 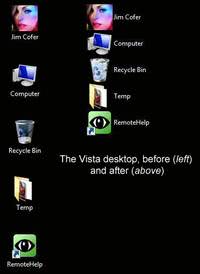 The left image shows the default icon size on the XP desktop and the size if icons after you run Deskview on the system. The right image highlights the same two states on Windows Vista instead.

An added benefit of that is that you don't need to make sure DeskView is run on start or whenever it is needed.

We have uploaded a copy of DeskView to our own server. Please note that we don't support the program in any way. To download it, click on the following link: deskview.zip