Edit Mp3 without encoding them

I sometimes want to cut mp3 audio files into separate parts, mainly because the single file is that large that it does not fit on my mp3 player. This may also be useful to create mp3 ringtones who only use the first 30 seconds of a song anyway. It does work the other way round as well.

It is possible to combine several mp3 files as well which I like to do with audiobooks as I prefer one large file instead of many smaller files, mostly because it makes recognition easier.

A software that is able to do all of this and much more is Mp3 Direct Cut. It can also alter the volume of the mp3 file for instance.

What I like about MP3 Direct Cut is the ease of use. Cutting mp3 files for instance can be done with a few clicks only and all other options and functions are available that easily as well. New files are saved in an instance because the files do not need to be re-encoded. 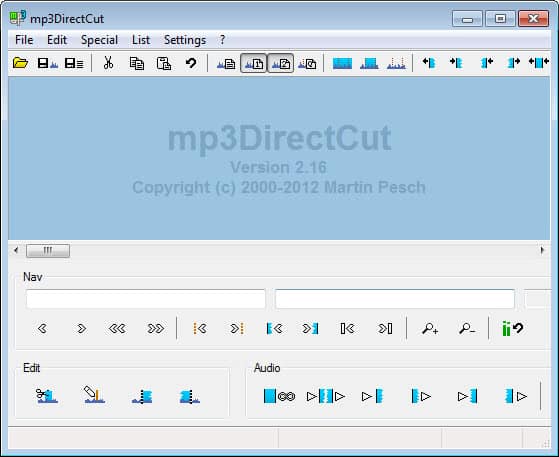 The program has the following features:

A lot has been changed since our initial review in 2007. The program has AAC support now for instance or unicode support which it did not have back then.

The core functionality on the other hand has remained the same. You can still use it to cut mp3 files directly and without the need for re-encoding them in the process.

Load a file into the application to start. You can play it right away if you like, or a specific part of it which can be useful to preview it.

Use the mouse to highlight part of the file and use the playback controls to play it.  Use the action buttons to cut the mp3 and save it afterwards again to your system.

The special menu at the top lists several additional processing options such as auto-detection of pauses or the checking of re-syncs.

The interface displays a lot of buttons. Move the mouse cursor over a button to display a popup explaining what it does.

Previous Post: « How to play Ape files?
Next Post: ZML is for movies what Allofmp3 was for music »