Update: Please note that Windows SteadyState is no longer available as of June 30, 2011.

The major benefit of Steady State is that you can create user accounts, restrict those accounts plus define that all changes made by these accounts are undone after rebooting the system.

This is great if you have friends, family members or other users who tend to break things or do stuff on your computer that you do not want them to.

With Steady State you may not care at all anymore because all they do is gone after rebooting the computer. After adding a user, which can be imported if you are using Steady State on another computer, you can select either one of the pre defined security profiles such as High, Medium, Low, No Restrictions or Custom ones.

Custom ones are probably the most important ones because you get to control what the selected user can do in detail. These restrictions can be defined in the four tabs General, Windows Restrictions, Feature Restrictions and Block Programs. 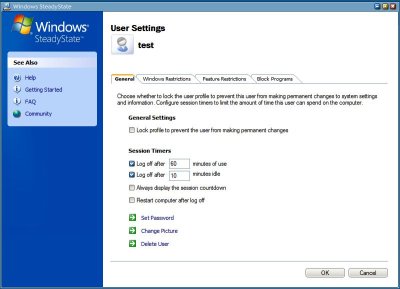 The General Tab lets you specify a time limit for this account and select if you want to automatically reboot the computer once the limit has been reached. This one is actually pretty nice to prevent that your kids for instance access the computer longer than they are allowed to.

The Windows Restriction tab lets you hide drives and restrict Windows functions. This includes to block access to the task manager, command prompt and removing the run icon in Windows. This removes options for the user to make serious changes to the system, most of the time many of those options will have to be enabled if you want to secure your computer.

The Blocked Programs tabs lets you block softwares that are installed on the system from being executed by the user. Many softwares are already in that list but you can also browse your system and add executables to that list.

The big question however is if Solid State is really securing the system to prevent clever users from accessing it. The answer is of course no it does not. It does help to protect your children and users who do not work regularly with computers. Everyone who knows how to work with Linux Live CDs knows how to break into a Windows XP system or use Linux to do whatever you would like.