The game for this weekend is called The Jeluvian Project which is a tactical top down shooter with nice visuals and a compelling storyline. The Jeluvian Project is a game that takes time to master and the excellent tutorial helps you understand game mechanics and prepares you for the real battles that lie ahead.

Some may feel that the tutorial is a tad to long or prefer to step right into the action without knowing what's actually going on story wise. If you are one of those players this game is not for you. It mixes in several real time strategy game elements such as selecting several units at once and moving them with the mouse around the screen. 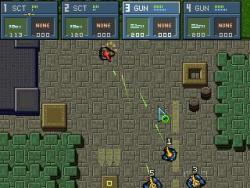 The player has to carefully plan his steps and always consider the health and ammunition of his squad to be able to master a level. Some players might find it extremely difficulty to beat certain levels because the enemy is - most of the time - on possession of an incredible number of units.

The levels in the game are called operations. Before you jump in to the first mission, you may want to check out the preferences first to make a couple of adjustments. Here you can switch to windowed mode for instance,Â  change the quality of explosions, and how you would like the game to handle the audio for you.

You can skip most dialogs with Esc, or use the V key to speed them up so that you do not have to wait that long for them to complete.

You control your units by left-clicking on them, or using the left-mouse button to draw a rectangle around multiple units. The right mouse button fires the currently selected weapon.

I highly recommend that you play through the tutorial missions as you get to know other hotkeys and actions that the game makes available to you.

The game may not be the prettiest anymore if you compare it to games produced in 2013, but it still has a lot going for it. While graphics, pathfinding and other elements may be lacking in comparison to today's standards, it is still a fun and challenging game to play. Plus, it works very well on newer versions of Windows as well.