How to remove browser toolbars

Toolbars are a plague; Every other software, especially free software asks the user if he wants to install a toolbar on his system. This is most of the time not that useful and clutters only the browser window. Some toolbars do not offer an uninstallation routine at all which means that it is problematic to remove them completely from your system.

The free software Toolbar Uninstaller scans your system and displays the installed toolbars if they are known by the software. It currently detects 53 Firefox toolbars and 3 Internet Explorer ones. This does not seem that much but the author is explicitly asking for help to be able to add more toolbars to the application.

This is done by submitting information about a new toolbar on the developers homepage. It will then be tested and included once a removal routine has been found. The software is currently available as a beta version and definitely something to look after in the future. 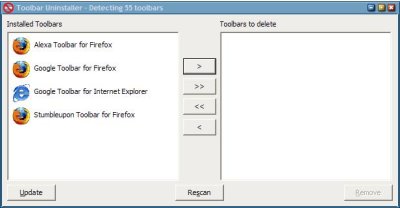 Update: Toolbar Uninstaller has not been updated since 2008 which is a strong indicator that it can't remove newer toolbars that have been released after the last program update.

There are however a couple of alternatives that you can make use of instead.

If you want to remove individual toolbars, you can use the following guides that assist you with the removal:

If you have multiple toolbars installed, you may prefer a program like Toolbar Cleaner which removes any ties that toolbars have with web browsers that are used on the system. While it does not uninstall the toolbars, it makes sure that they are no longer linked to any browsers.

An alternative to that is Avast's Browser Cleanup Tool which can remove the majority of toolbars as well.

Previous Post: « Use your Printer and Scanner as a Copier
Next Post: Blank Urls in Internet Explorer 7 Favorites »