Use your Printer and Scanner as a Copier

A copier machine is basically a scanner and printer in one device. The clever folks that coded iCopy thought that it would be equally nice to use two machines - that is a printer and a scanner - to emulate a copier. You can use iCopy to scan a document with your scanner and print it afterwards on your copier, all in one task and hassle free.

I found this nice tip at the One Tip a Day blog who got it from Digital Inspirations. The open source software iCopy does not require installation and can be run from any location including USB devices.

Just place a document on your scanner and press a button in iCopy to start the process that prints the document in the end. It's possible to set a quality level in iCopy as well as a brightness and contrast level for the scanned image. Several copies can be printed one after another as well. 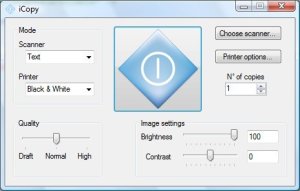 Update: The developers have improved the program significantly. It is compatible with all recent versions of the Microsoft Windows operating system, which, at the time of writing is Windows 8.

The simple interface has remained the same, as has the portable nature of the application. The program supports multiple pages and automatic document feeders now which should make things on supported devices a lot easier. Image settings can now be modified, supported are brightness, contrast, resolution and enlargement.

You can create pdfs with a single click which is another interesting feature. The program's feature list does not end here. It now offers a preview function, can scan multiple pages before printing and supports a bunch of command line parameters.

Some scanners ship with copying options of their own, so that you may not need to run the program at all for that. Not all do though so that you may still make good use of the application after all. Plus, you may not like the way copying is handled by the native scanner application or program, or miss features that iCopy makes available.

So, it may still be worth a shot after all.

Previous Post: « Control Power State of a local or remote PC
Next Post: « How to remove browser toolbars