Slickr is a Open Source screensaver for Flickr which gives the user a multitude of possibilities to display images which are pulled from Flickr in realtime. The only real hassle that could get into your way is that Slickr requires a Flickr api key to work. Everyone with a Yahoo account can get one without problems though.

The Flickr api key can be added in the settings of Slickr and this is also the place where you customize the software. It is possible to display images of a specific user, a group, from everyone with the possibility to customize this request further by selecting Recent pictures, tagged pictures or Interestingness. Last but not least it is possible to use a local folder instead and display the pictures of that folder instead.

This is however not all that can be customized. You can select a minimum width and heights, a maximum size, the time between picture changes, size of the cache and several other settings. 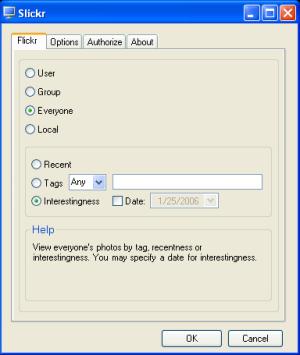 Slickr will automatically add itself as the screensaver in Windows if you select the Screensaver option from the start menu.

Update: The original screensaver is no longer available, the developer site returns a not found error when you try to open it. We have removed the link to that site as a consequence.

Flickr .Net Screensaver is a viable alternative for the Windows operating system. Like the name suggests, it requires the Microsoft .Net Framework 2.0 to be installed on the system. On the positive side of things, it does not require a Flickr APi key anymore to function.

Windows users can use Flickr .Net Screensaver to display plain photos with or without the title and author, postcard photos which give the photo a colored border and an option to rotate it slightly.

The program opens the screen saver settings of the Windows operating system automatically after installation allowing you to customize which images and photos get pulled from Flickr.

Click on the settings button here after you make sure that Flickr is selected as the screen saver of choice. Here you get a variety of settings that enable you to customize what is being pulled from Flickr.

The pictures tab for instance allows you to pull photos from a specific user, a group on Flickr (wallpapers for instance), or everyone by tapping into the recent category or a tag you specify.

You may need to authenticate yourself if you want photos displayed that are private, either private because a user has set them this way, or because they are posted to private groups.

The options tab lets you specify a minimum size, the drawing method, if you want the screen to be filled by the photo if it is not large enough, and whether you want text to be displayed as well.

Once you have made the necessary changes close the preferences window and click on the preview button on the screen saver settings page to test the current setup.

You can use the program to display photos from friends or family members, or a group that you are a member of. The program is very versatile in what you can do with it and leaves little to be desired in this regard.