Use the Windows Vista style in XP

I'm not sure why someone would want to change the style of the XP installation to that of Windows Vista but it seems that the demand for this is immense. Version 7 of the Vista Transformation Pack has been released yesterday which turns your ordinary XP style into one that resembles the style of Windows Vista.

The Vista Transformation Pack is basically changing every aspect of Windows XP to look like Windows Vista. Some of the most notable changes are of course the style, the boot and logon screen, the icons and dialogs.

Next to that you get several features that have been introduced in Windows Vista like the Sidebar and transparency effects. I would suggest to backup the most important files and create a system restore point before you execute the transformation for the unlikely event that something goes wrong.

The changelog indicates a lot of bug fixes, updates, style and icon replacements. 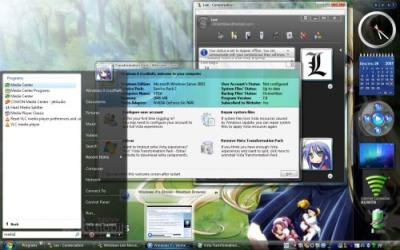 Update: The Vista Transformation Pack for Windows XP is no longer available at the original download location. It seems that the theme has been pulled. An alternative is the total conversion VistaMizer which turns your Windows XP theme into a Windows Vista look-a-like. The safest way to install the total conversion theme for Windows XP is to install it as a normal app in the operating system, as it allows the uninstallation later on. If you patch the operating system directly instead, you can only revert the changes if you install another theme, or re-install Windows XP instead. It is suggested to create a restore point during setup.

Once you have installed VistaMizer and rebooted your PC, you will notice that everything looks much more like Vista and a lot less like XP. You find new icons and fonts installed on the system, and all the standard apps like Windows Media Player or Internet Explorer updated as well.

Note that you do need enough processing power to run the theme. If your computer is low on memory, you may notice slow downs and other side effects like increased caching because of that.

Previous Post: « Find out which audio or video codec is missing
Next Post: « Get the Vista Startmenu for XP