World of Padman is a multiplayer ego shooter that is powered by the Quake 3 engine, which is a very capable - but outdated - engine. Just imagine the game Quake 3 without the adult science fiction theme but a theme that resembles a game for children.

Not saying that World of Padman is actually a children's game. Action is as fast paced as in Quake 3 and the game mode is still deathmatch: frag the others before they frag you. Levels look really detailed and the style of the game is pretty unique as well. Before you begin you can select a character that you want to play and customize it a little bit.

Once that is done you can jump right into the action and join an Internet server. (Single Player mode is not implemented yet) Servers are well frequented especially in the evenings, you should definitely find some players on a server with a good ping and play with them some maps. 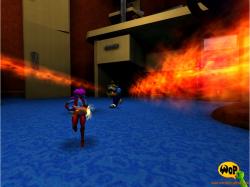 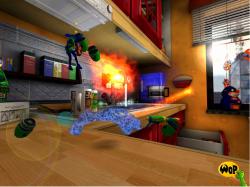 Weapons resemble that from Quake 3 but got different looks and names of course. The names of the weapons (Nipper, Betty and Balloony for instance) fit pretty well in the overall theme of World of Padman. You find the usual selection of weapons, power ups and objects like jump pads in the levels to make them more exciting.

One more thing, this game is really big. You have to download 550 Megabytes which could take a while depending on your connection. I think it is very well worth the download. World of Padman excels at something that many commercial games don't deliver - Fun. See you on a server, my nickname is rev.

The game is still actively maintained, with news being posted regularly on the developer website. The latest version of the game, World of Padman 1.6 is available for download not only for Windows but also Linux.

Update: The game supports other game modes like Capture the Flag as well and new maps seem to be introduced to the game fairly frequently as well, for instance through community mapping contests.

If you are bored by the refresh of the latest COD or BF type of games then you may want to give this one a try.