Rooms is an excellent puzzle game. The objective is to move the character from the start of the level to the door that exits it. This can be done by either moving the character himself if there is space to move or by moving the different rooms that make up the level.

Take a look at the screenshot below to get a better impression of how a typical level looks like. Several rooms make up each level and you can only move the room that you are standing in at the moment. 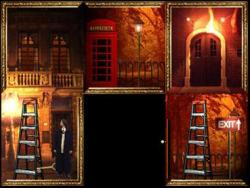 You can move it into any adjacent space as long as it is not occupied by another room. If you look at the the image above you could move the room that the character is in only to the right side. Moving the character offers more possibilities. You can climb ladders, teleport Matrix-like using phones and use objects like keys to open doors that block the exit.

Rooms can be downloaded to play offline or played on the web. I suggest to download the full version which has a size of 30 megabytes. Great addictive game.

The game walks you through basic game mechanics in the first few levels so that you get used to the game quickly. You basically move your character with the cursor keys to walk left and right or climb ladders up and down. To move a room, you simply hold down the left mouse button in the room your character is currently standing in and select one of the adjacent fields to move it to. Remember that you can only move it into an empty space.

You enter the exit with the up key, and can pick up items such as keys with the left mouse button as well.Â  You will find a variety of items in later levels, a fishbowl for instance which you can use to enter a room full of water.

The game offers a total of 12 different levels that you need to complete. While that does not sound like much, it is fun enough to be entertaining for a while.