I still believe that Starcraft is the best real-time strategy game that was ever produced and hope that Blizzard will one day create a second part of at least a MMORPG out of it.

Starcraft is part of my past, I used to meet with friends back then and play it in local lan games all night long. It was perfectly balanced and much better than Command and Conquer in my opinion. Someone - I suppose another fan - has created an unbelievable amount of Starcraft Origami and uploaded pictures of them to Flickr.

Just take a look at the following pictures. They show Terran Siege Tanks (my favorite unit by the way), Terran Behemoth Class Battlecruisers, Zerg Ultralisks and even a Protoss Carrier. I'm really wondering how long it took to figure out how to create those Origami. 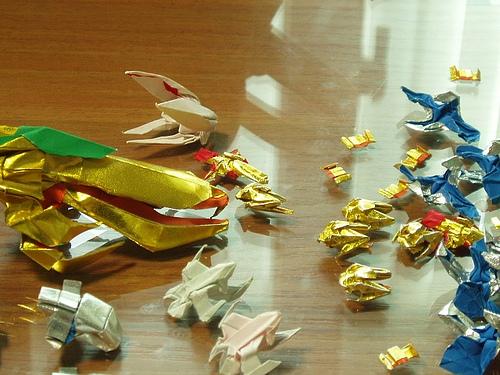 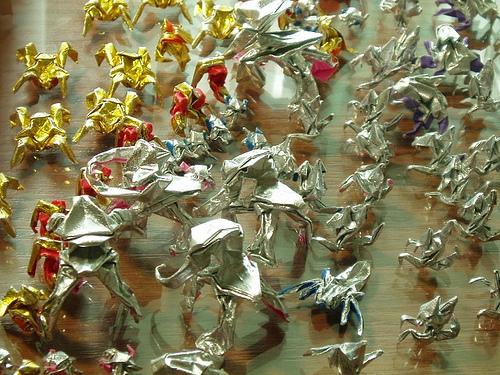 He must have spend quite some time creating all those Starcraft vehicles and figurines, considering that the last image is showing a couple of dozen creatures and vehicles from Blizzard's popular gaming franchise.

The uploader does not reveal any information about the origami unfortunately. We do not know if they have been created by one individual or multiple or if there are more photos that have not been uploaded yet to Flickr or another photo hosting site.

Update: Starcraft 2 has been released by Blizzard and while it has attracted a large - mostly clan based - fan base immediately, it did not impress me as much as the first part of the series. The campaign is limited to one race, while the original Starcraft campaign let you play all three races. Blizzard will release add-ons for the game that bring the other campaigns to the game. I'm not really happy about that and won't buy the two add-ons that will be released by the company to protest against this practice.