I forgot the weekend fun thread last Friday and promised myself that this would never happen again. Today I'm going to review a great arcade shooter called Veck Special Edition which looks and plays like a mix of many of the classic arcade games including Asteroids, Robotron 2084 and Smash TV.

This version is packed with 15 levels each lasting one minute. Your space craft gets a power update every minute which you bitterly need to defeat enemy ships that come in later stages of the game as they too become more powerful and therefore difficult to beat.

Veck is a classic shoot at everything on the screen type of game that seem to make an comeback with independent game developers lately. Enemies do not fire at your spaceship in the first levels at least so the only thing that you have to take care of besides shooting like a maniac is to avoid the kamikaze spaceships that try to ram into yours. 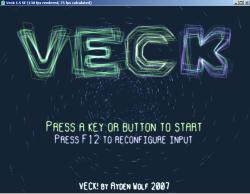 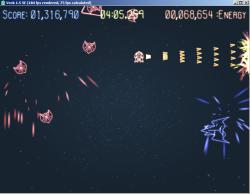 The controls are kinda fun. You can select keys for moving your spaceship around plus you can opt-in to use four different keys to use directional shooting as well. This means that you can fly in one direction and still shoot in another. This is essential in this game, believe me, and especially though when ships are following you all around the screen.

Veck Special Edition is a Windows game that is using only 1.7 megabytes of space.

Update: The original location Veck was available is no longer available. There is no download of the game available on the Internet anymore. Sites that claim to host it are in fact not hosting it, or asking you to download their installer first which may or may not install a bunch of adware on your system.