Game for the Weekend Shadowflare

Shadowflare right from the beginning reminds me of what is probably the greatest action rpg game of all time - Diablo 2. The perspective, game mechanics and even graphics look really similar and are really good for a freeware game. You control a nameless warrior who starts in a small remote village. A dog companion that can be commanded is always by your side and you receive your first basic tasks from the commander of that village.

The commander is nice enough to provide you with basic equipment which you should equip right away with a tap on the I button. Even the buttons are mostly the same so that Diablo players will feel right at home from the start.

Once you go outside the town you are attacked by the usual amount of low level enemies: namely Goblins, Orcs and bats.

You attack them with the left mouse button. Later in the game you can use the right mouse button to throw spells at enemies which have to be learned before you can do so. Pressing Space changes the activity level of your dog companion. There are two modes, inactive which is the default mode and active. Inactive means that your dog will not attack but will take no damage as well. 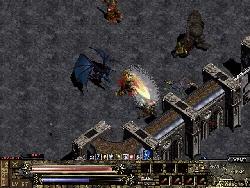 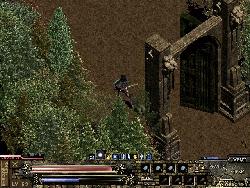 Active means that it will engage in combat and take damage. A nice feature is that you can choose between several dogs that all have distinctive abilities.

One of the most important things in early game play is that you can get healed by the healer in the town. Just talk to her if your health is low and she will maximize it again.

Shadowflare is a great game, lots of fun. It has an internet mode that I did not test yet.

Update: Please note that the last game update dates back to 2009 which is an indicator that the game project has likely been abandoned by its developer.