I love to play games like Streets of Rage and Final Fight in the arcades with friends. It was tremendous fun to beat down several punks at once with the character that you have chosen to play.

A nice feature was the character selection screen before you start a game. Would you select a quick guy who was faster but does not hit that hard, or would you rather select the slow brawler that hits harder? Streets of Rage Remake offers six playable and two unlockable characters to chose from. All vary in power, technique, speed, jump and stamina.

Streets of Rage Remake lets you fight alone, with a computer by your side or with a second human player on the same computer to fight against hordes of enemies the game throws at you.

The game supports one gamepad which means that the other human player will have to use the keyboard to play the game. 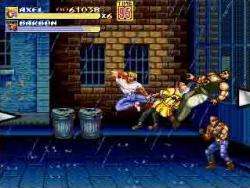 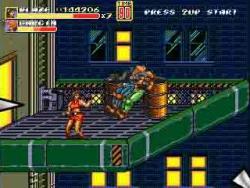 The game uses the typical three buttons of the 16-bit Genesis system. Use C to attack, V to jump and X for a devastating special attack. The B button seems to be a unique feature as it calls the police which smartbombs the whole screen.

It's more fun with two players of course but the single player mode plays fine as well. Great free game, if you like those fighting games you should definitely take a look. Download is about 70 megabytes.

Update: The final version of Street of Rage Remake has been released in 2011.Â  You can download version 5.0 of the PC game from the developer website.

Not that the final version of the game includes a lot more than any individual SOR game did. You can play Streets of Rage 1, 2, and 3 characters and even new characters, face enemies from all three parts and new ones, get to play a total of 103 different stages, and get access to additional features such as a name or profile editor, cutscene viewer or additional game modes.

Update 2: Downloads are no longer available on the author's website. You can however download it from G4G instead. Note that tit also offers an updated version 5.0a which you can download instead.