Game for the Weekend Bloodmasters

I publish a review about a new great game every Friday that can entertain you during your weekend. The game for this weekend is called Bloodmasters - a top down multiplayer old school arcade game that I enjoyed playing regularly for a couple of days.

All the known game modes like capture the flag and team deathmatch are available and add to the fast paced game experience. The maps are filled with weapons, armors, health packs and munition to fight the other players / team.

The game could almost be a clone of Quake 3 Arena or Unreal Tournament in 2D. All the classic weapons like the minigun, rocket launcher and lightning gun are available and can be used to vaporize the enemy. Even game modes that I do not like this much (Deathmach) are pure fun because the game is fast and intense and respawn is almost instant.

You can fall of the edges so pay attention when you are near them, it happens often that a grenade explodes near you and the detonation pushes you into the darkness counting as a suicide, bad if you play team deathmatch. 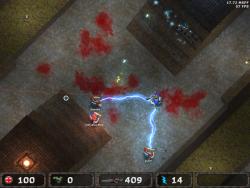 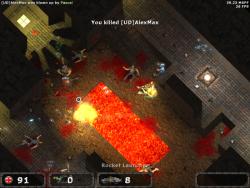 Bloodmasters should run even on old computers the requirements are 1.4 Ghz cpu and 256 MB of ram.

The developers have turned Bloodmasters into an Open Source game, now hosted over at Source Forge. The program unfortunately has not been updated since then. The latest official released version of Bloodmasters appears to be Bloodmasters 1.2, even though the devs have posted a preview of version 1.3 of the game on the official site. It is still a fun game to play,there is no question about that.

Update: The last version of the game has been released in 2008 which is a strong indicator that the developer has abandoned the game. While you can still download it, it is likely that you won't find many players online that still play the game. This should not keep you from playing with a bunch of friends though.

Previous Post: « Add a bigger hard drive to your PS3
Next Post: « Game for the weekend Ray-Hound