Paste and Go in Firefox

Last but not least you can use a keyboard shortcut for the same effect. In Windows and Unix it is Control + SHIFT + V, on Mac COMMAND + SHIFT + V.

Some users are reporting that the newest version of the plugin caused errors while using the keyboard navigation. This is no problem for me because I'm not using keyboard navigation at all but it might be for some of you who do. You better don't install the extension if you use or need the feature.

Update: The Paste and Go extension for Firefox is no longer available at the Mozilla Add-ons repository. An alternative is Paste to Tab and Go which adds two new features to the right-click context menu when you right-click the address bar in the browser. 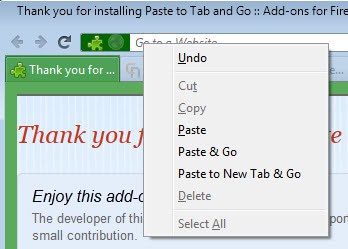 Just right-click the address bar and select the paste and go, or paste to new tab and go option from the context menu. The first pastes the information from the clipboard in the active tab, the other will open a new blank tab in Firefox to perform the same operation there.

Update 2: Mozilla has added Paste and Go functionality to all versions of Firefox from version 4.0 on. you no longer need an add-on for this which is probably the core reason why you won't find add-ons for that particular feature anymore on the Add-ons website.

Martin Brinkmann is a journalist from Germany who founded Ghacks Technology News Back in 2005. He is passionate about all things tech and knows the Internet and computers like the back of his hand. You can follow Martin on Facebook or Twitter
View all posts by Martin Brinkmann →
Previous Post: « How to create Firefox extensions
Next Post: Firefox add-on to discover media links »