After a lot of people told me that I forgot to review one of the best anti-virus freeware products out there I decided to take a look at Clam Win to get a better view on the claims made. The good thing besides that its free is that it's also Open Source which makes it more transparent than the rest of the free antivirus programs where you can't analyze the code to see what is going on.

The program is easy to download and install which is also a plus, just download, double click on the downloaded tool and you are ready to go. You have the option to include different languages, the source and add windows explorer and outlook integration. I'm not using Outlook so I removed this option and left everything else untouched in the installer.

The user interface is a basic one, you don't have all the nifty buttons and fine curves that most other antivirus programs use nowadays. Clam is simply in that way, but its also fast due to this. I don't really care about looks if a program does what I expect it to do, but I know there are lots of people who like a resource eating monster like Symantec Internet Security more than a freeware program without the cool animated effects. 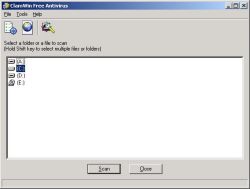 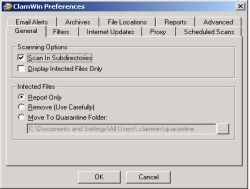 You have lots of configuration options: you can set filters, email alerts, schedule scans and use a proxy for the automatic internet updates if you like. Automatic updates are a great plus for Clam, my current antivirus software that I use (AVG) does not have automatic updates, you have to start the updates manually which is a great hassle. Especially when you donÂ´t know if there has been a update at all Update: most antivirus solution support automatic updates by now).

What I don't like about Clam is that its only having a plugin for outlook which is the most used email software of course but should not be used by anyone serious about making their PC more secure.

I can recommend Clam Win especially to users of Microsoft Outlook and users who tend to forgot to check for internet updates of their antivirus software. Resources accessed are minimal which is also a good thing for an anti-virus product.