BASSOON Tracker is a free web application that gives you full control over an Amiga music tracker and player.

The Commodore Amiga, the successor of the Commodore C-64 home computer, was a very popular home computer back in the 80's and 90's. Among the many strengths were excellent graphics and sound capabilities; this led to a thriving games and demo development scene.

Anyone could just fire up a free program like Soundtracker on the Amiga to start composing music or to play music on the device.

Musicians benefited from extra hardware like a sampler that you could connect to the Amiga to record new music samples.

Considering that the original Amiga had only 512 Kilobytes of memory (which you could extend), and that the memory had to be shared, it is quite astonishing how well music sounded on the Amiga. 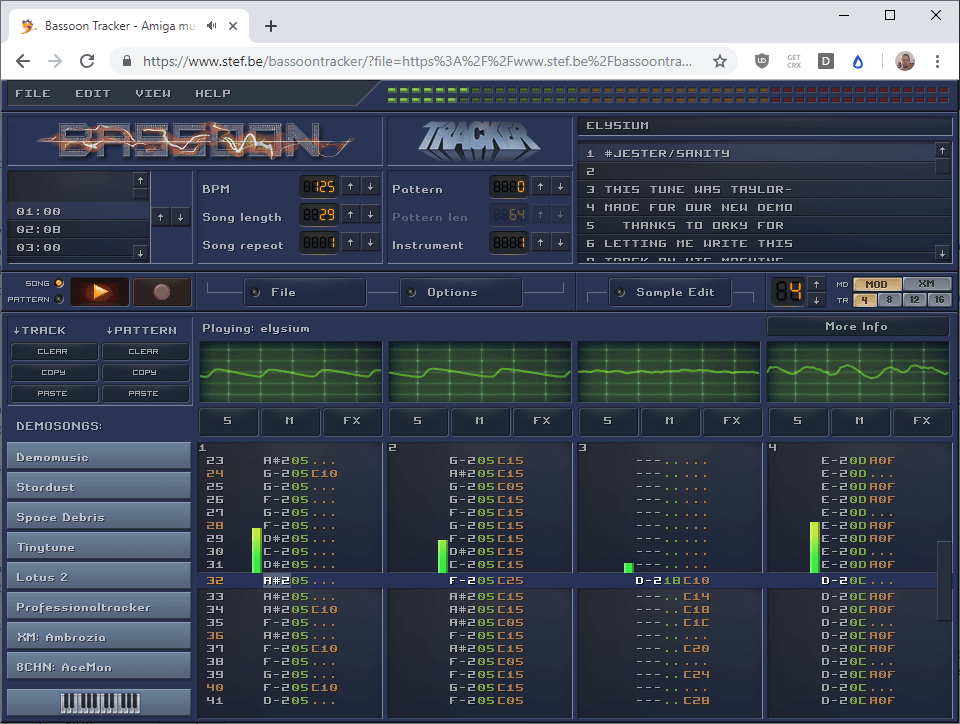 Bassoon Tracker is a sound tracker for the Amiga in JavaScript. You may use it to play music and to create music of your own using it.

One of the greatest strengths of the player is that its developer has added support for several popular Amiga music databases and local file playback. Just select File > Load Module, and select a song from one of the available sources.

Supported are Mod Archive, Modules.pl, Dropbox, Bassoon, and local songs. The song listings lack search capabilities though which means that you will have to scroll a lot to find songs of interest.

Another thing that is missing is support for playlists; you can only play individual songs right now.

A click on the play button starts playback right away. The player displays the entire composition in its interface while the song is playing so that you can learn a thing or two from good composers.

The song composing part of the music tracker supports major features: load, play and edit samples, use the integrated piano, edit different tracks, and save modules that you have created using the tracker.

BASSOON Tracker is a great web application for Amiga veterans and others interested in music and especially the Amiga music scene. Most of the features that you'd expect from a tracker are implemented already, some, like playlist support, would be really handy to improve usability.

Now You: What is your take on Amiga music and today's music?