A look at Fiddler Everywhere preview

by Martin Brinkmann on November 08, 2018 in Internet, Software - 8 comments

While Fiddler won't go away anytime soon, it is Fiddler Everywhere that will replace it eventually.

Fiddler Everywhere was designed to run on Windows, Linux and Mac Os X equally well. While you can download Fiddler Beta builds for Mac OS X or Linux, the versions for these operating systems never made it out of beta.

Fiddler Everywhere will be offered as a free download for all supported operating systems similarly to how Fiddler is offered for free. It will include all features; Enterprise customers can purchase Enterprise Priority Support which guarantees a 24-hour response time during the subscription period. 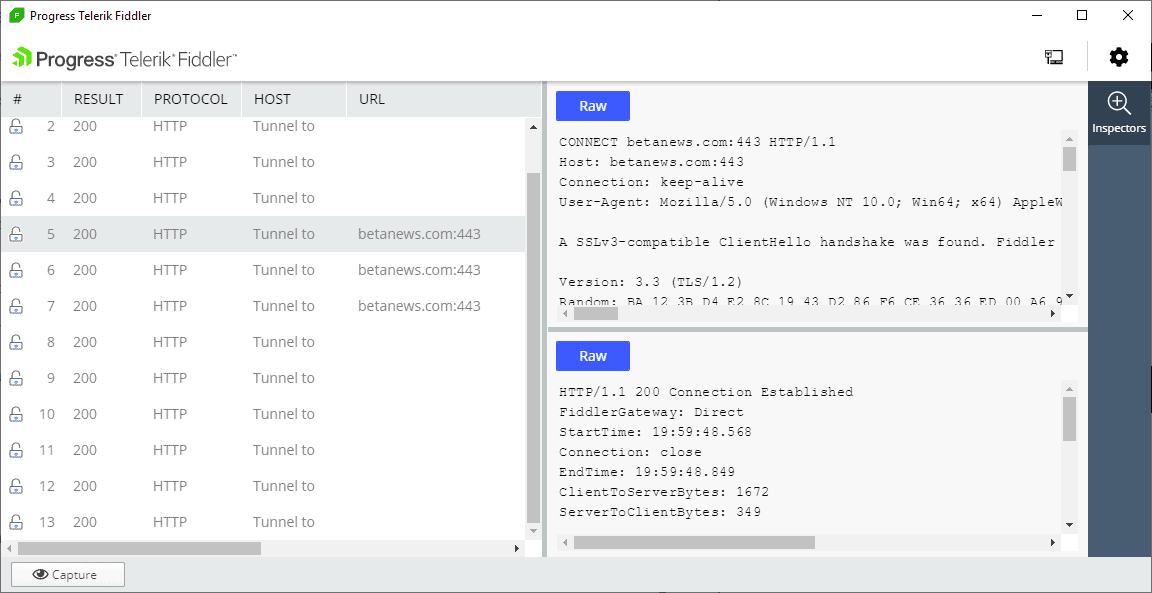 Please note that you are prompted to type an email address and select a country before you can download the program to the local system; these values are not verified, however.

Fiddler Everywhere installed and ran fine on a Windows 10 version 1809 PC. It runs as a system proxy on startup.

The interface is divided:

The functionality is limited at the time of writing when compared to Fiddler. Fiddler Everywhere does not support add-ones, web session manipulation, the debugging of traffic and other features. Plans are underway to add the missing functionality. Users interested in the application can vote for ideas on the Feedback Portal and leave feedback there as well.

The developers plan to focus on the following features (that you may vote on) next:

You can check out the article how to identify and prevent programs from phoning home which demonstrated how to do that using Fiddler. It gives you a good impression of what Fiddler can do. You may use Fiddler to determine the connections that Windows 10 establishes as well.

Fiddler Everywhere is a work in progress; the preview version lacks many features of Fiddler and it will take some time before they are implemented.  It is not a replacement right now for Fiddler but it could become one.

Now You: Do you use Fiddler or other applications such as Burp Suite or Wireshark?

Previous Post: « Automate Mouse and Keyboard Activity with PlayStatic
Next Post: Daram Renamer is a great rename tool for Windows with one tiny flaw »