Microsoft implemented new functionality in Windows Defender Antivirus for Windows 10 recently that makes the antivirus solution run in a sandbox on the system.

The feature, which is available in Windows 10 version 1703 and newer, needs to be enabled for the time being as it is not active by default currently.

Microsoft hopes that Windows Defender Antivirus' new restrictive process execution environment helps protect the application against attacks that are targeted directly at it. Antivirus solutions often need to run with high privileges to protect the entire system against malicious attacks; the need to run with high privileges make antivirus programs high profile targets, especially if they are used widely.

Running Windows Defender Antivirus in a sandbox ensures that in the unlikely event of a compromise, malicious actions are limited to the isolated environment, protecting the rest of the system from harm. 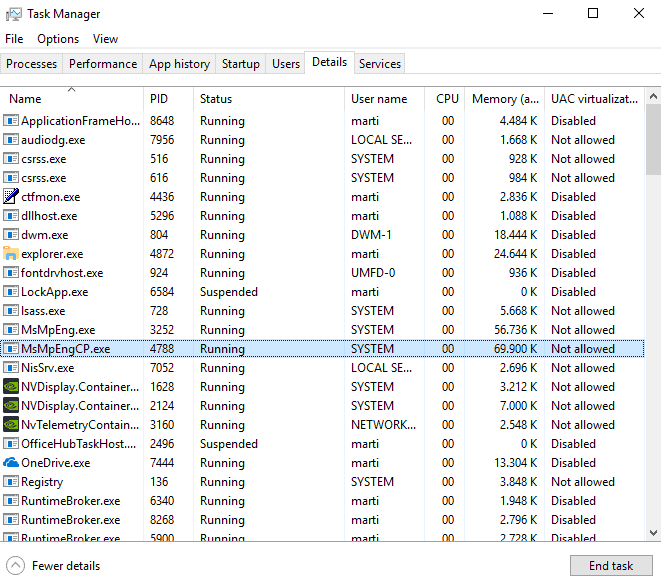 Sandboxing is not enabled by default at the time of writing. It is available, however, on all devices running Windows 10 version 1703 or higher.

Tip: if you are unsure about the Windows version run winver.exe on Start to display it.

Here is what you need to do to enable Windows Defender Antivirus sandboxing right now:

Verifying that the sandbox is running is simple: open the Windows Task Manager with a tap on Ctrl-Shift-Esc and make sure you display all details (click on more details if not), and look on the Details tab of the program.

Locate MsMpEngCP.exe there. If you see it, the sandbox is up and running. The process runs with low privileges and uses "all available mitigation policies" according to Microsoft.

You can use third-party programs like Process Explorer as well if you prefer those to verify that the sandbox is enabled.

Check out Microsoft's blog post on the Microsoft Secure blog for implementation details and challenges that Microsoft faced during research and development.

Now You: Which antivirus solution do you run?