Nvidia released a new driver for its GeForce video cards today that introduces official support for Windows 10 version 1809 which Microsoft released on October 2, 2018.

Some users who upgraded earlier versions of Windows 10 to the latest reported issues that they experienced during and after the upgrade. Reports indicate that personal files may be deleted for some users and that there are also some graphics related issues that users experience.

The updated driver is available as a standalone download on the Nvidia GeForce website and also as part of GeForce Experience's automatic update mechanism. 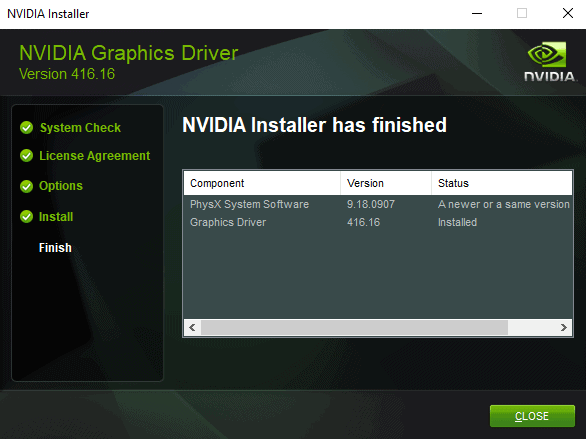 The driver introduces support for the October 2018 Update for Windows 10 that Microsoft released on October 2, 2018; this includes support for DirectX Raytracing (DXR).

Microsoft introduced support for DirectX Raytracing in the October 2018 Update for Windows 10 promising that it would deliver support for a "new class of real-time graphics techniques".

The new graphics feature works out of the box on hardware that supports it according to Microsoft, and games that make use of it are not far away either.

The following issues are still open in the driver:

The new driver adds or updates profiles for the following games:

Tip: use NVSlimmer to install only the Nvidia driver components that you require or use a manual method to do this instead. As always, make sure you block the installation of Telemetry as good as you can during installation and disable Telemetry that Nvidia installs afterward if something slipped by.

Now You: Do you use Nvidia cards? What's your experience with these devices?

Previous Post: « How to disable the touchpad of the Surface Pro
Next Post: Latest GPU-Z detects some fake NVIDIA cards »