The team behind ScummVM -- Script Creation Utility for Maniac Mansion Virtual Machines -- has released ScummVM 2.0 to the public.

ScummVM is a program for Windows and other operating systems which you may use to play classic PC adventure games on modern machines. The application requires that you have access to the data files of supported adventure games.

The list of supported adventure games reads like the who is who of the adventure game genre. You may use the program to play games like Maniac Mansion and Full Throttle, Simon the Sorcerer, Gobliins, Broken Sword, Discworld or The Legend of Kyrandia using it.

While some of these games have been released as remakes or on gog.com, others have not and some gamers may prefer to play the games they already own instead of having to pay extra to do so. Gog.com makes sure that classic games run on modern systems. 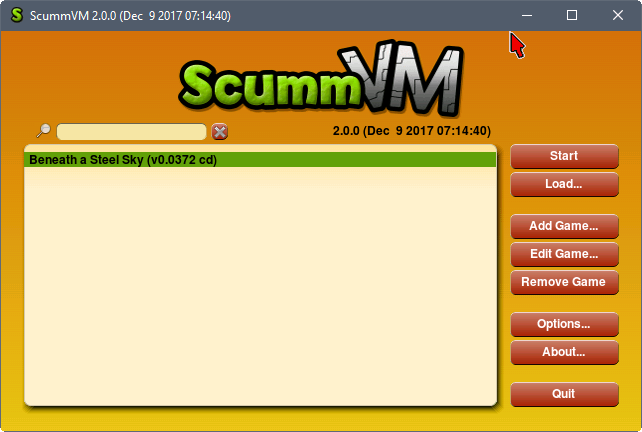 ScummVM 2.0 is available for various operating systems including Windows, Mac OS X and various Linux flavors. You can install it on exotic devices such as the Dreamcast, Playstation Vita or Risc OS systems as well.

Windows users run the supplied file to install the new version of ScummVM on the Windows machine.

ScummVM 2.0 adds support for 23 new games. Most of the games are from Sierra On-line and include classics such as Gabriel Knight, Leisure Suit Larry 6, Phantasmagoria, or Police Quest 4.

The new version of ScummVM includes many fixes and improvements on top of that. The developers improved joystick support and audio latency, and improved compatibility for several of the supported games on various platforms.

Adding games is relatively easy. You need to start the application, and use the "add game" button to start the process. ScummVM launches a file browser window that you need to use to navigate to the root directory of the game that you want to add to ScummVM.

This means that you need the game data on the device you run ScummVM on to integate it. While that may not be an issue most of the time, you may have difficulties if the game was supplied on floppy discs or even CDs, if your device cannot read these formats anymore (because it lacks a floppy disk or optical drive). There is no way around this unfortunately. 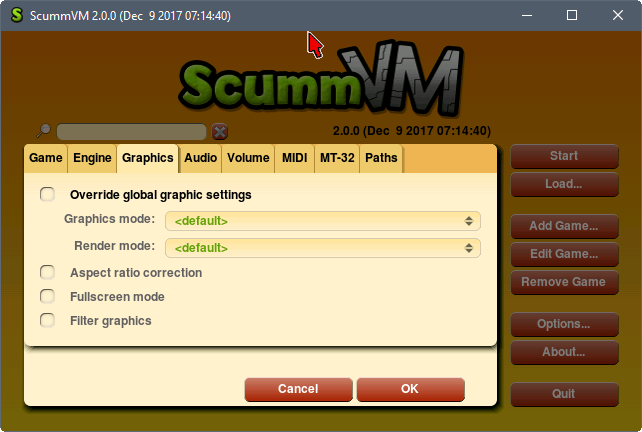 Once you have added a game you may override the default configuration. I suggest you play it without making modifications first, and only make modifications if you run into issues.

You can change options such as the graphics and render mode, fullscreen play, audio playback and subtitle speed in the configuration file.

ScummVM 2.0 is a major new release of the "get old adventure games to play on modern systems" platform. It adds support for several high profile Sierra games and others, Riven for instance.

Now You: Have you used ScummVM before?

Martin Brinkmann is a journalist from Germany who founded Ghacks Technology News Back in 2005. He is passionate about all things tech and knows the Internet and computers like the back of his hand. You can follow Martin on Facebook or Twitter
View all posts by Martin Brinkmann →
Previous Post: « Game Saturday: play golden age PC games on Classic Reload
Next Post: Nvidia Graphics Driver 388.71: PUBG Game Ready support »