Opera Software ASA, the part of Opera Software that remained after the company sold the web browser and other bits of the consumer business to a Chinese consortium, announced today the rebranding to Otello Corporation.

A group of investors from China made an offer for the whole company back in February 2016 for $1.2 billion US Dollars but the deal did not get regulatory approval. The deal was changed, as is the case often when that happens, and a Chinese consortium of investors, Golden Brick Capital Private Equity Fund, announced in July 2016 that it wanted to acquire the Opera Software consumer business for $600 million US Dollars instead.

The deal was approved on October 2016, and ownership of all Opera consumer products, most notable the Opera browser, Opera Mini, but also other apps, as well as the Opera brand name, were now owned by Golden Brick Capital Private Equity Fund. 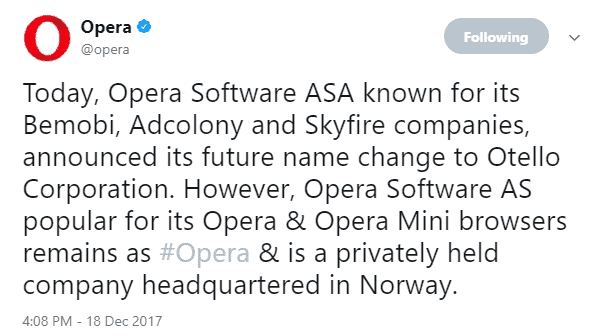 Today, Opera Software ASA announced the change of the company name to Otello Corporation on the official Opera Twitter account and elsewhere.

Otello Corporation is an advertisement and mobile company that runs Adcolony and the mobile application company Bemobi.

The name change was part of the deal, and removes the association with the Opera brand. An indirect association remains however, as Otello is an opera by Guiseppe Verdi based on Shakespear's Othello.

Martin Brinkmann is a journalist from Germany who founded Ghacks Technology News Back in 2005. He is passionate about all things tech and knows the Internet and computers like the back of his hand. You can follow Martin on Facebook or Twitter
View all posts by Martin Brinkmann →
Previous Post: « Changes to Opera's VPN service
Next Post: Opera 50 with Crypto Mining Protection »