Windows 10: Your phone linking is broken (for some) - gHacks Tech News
ghacks.net

Windows 10: Your phone linking is broken (for some)

One of the new features of Microsoft's Fall Creators Update for Windows 10 is the ability to link your phone and your Windows 10 PC.

The main idea behind the feature is to send information from your smartphone, Android and iOS devices are supported, to the Windows 10 PC so that you can continue the activity on the system.

You may send websites from your phone to your PC in this very first iteration of the feature.

Setup is pretty straightforward: open the Settings application with the shortcut Windows-I, and go to Phone when the window opens.

There you need to select the "add a phone" option to start the process. Select the country and type the phone number afterwards and hit the send button. This is all that you have to do on the Windows 10 device. 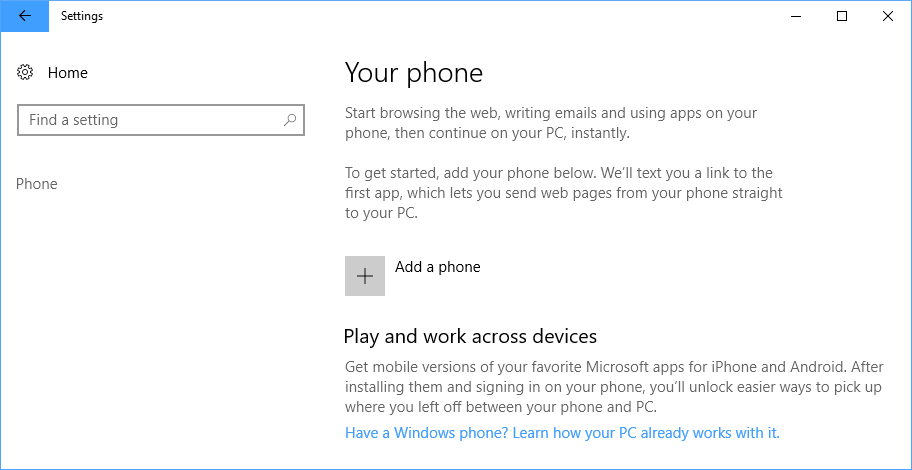 Microsoft sends a SMS to the phone for verification purposes. This is where things start to get off the trail.

The SMS that I got on my Android device stated that "Cortana is ready to install and link to your PC". A click on the link opened the Microsoft Cortana - Digital Assistant application on Google Play.

I could not install it, as the application is not available in my country. Other users report that they get a link to the Microsoft Arrow Launcher instead (German article).

What's particularly interesting about this is that the applications are not required for the "send to PC" functionality.

The application that you can install is Microsoft Apps. It seems that Microsoft Launcher and Microsoft Cortana - Digital assistant add the same capabilities. They do add new functionality to the device however that you may not require or even want.

The installation of Microsoft Apps on the device adds the "send to PC" option to the smartphone's share feature.

You are asked to sign in to a Microsoft Account the first time you make use of the feature, and may send the website then to one or all devices linked to the smartphone.

I think it is confusing that Microsoft pushes different apps to user devices if they set up the "send to PC" feature on Windows 10 machines. The fact that the Cortana application is offered but not available in some regions needs to be addressed asap, as users are stuck then at that point when that happens.

Is Microsoft using the feature to push some of its applications on to user systems? What's your take on this?

Article Name
Windows 10: Your phone linking is broken
Description
The process of the new "send to phone" feature of the Windows 10 Fall Creators Update seems broken, at least for some Windows users at this point in time.
Author
Martin Brinkmann
Publisher
Ghacks Technology News
Logo

Previous Post: « How to analyze Windows 10 upgrade errors
Next Post: How to fix Memory Management Bluescreens on Windows 10 »