QTranslate 6.4 is a new program update for the popular translation and OCR software for devices running Microsoft Windows.

I reviewed QTranslate back in 2012 for the first time; the program has been updated by its author regularly since then, and the release of version 6.4 is as good a reason as any other to take a second look at the program to see what has changed since that initial review.

This review uses QTranslate 6.4 for Windows as its base. I will reference features of previous versions as well that were not supported by the application when I reviewed it in 2012. 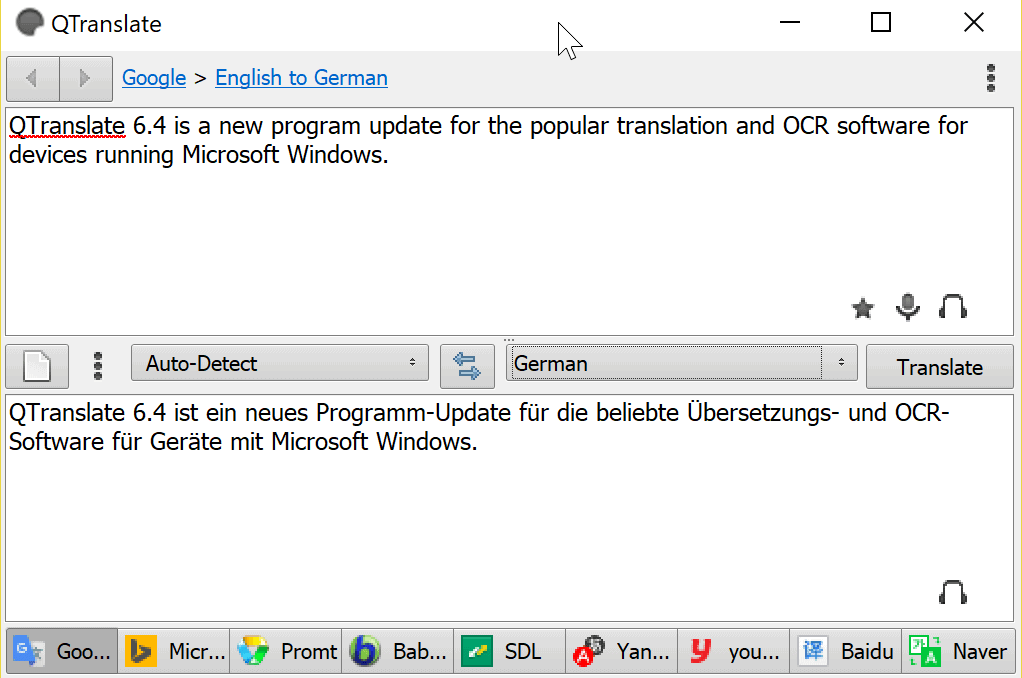 The interface of QTranslate 6.4 looks pretty much identical to the version that I reviewed back in 2012. It features support for new translate engines and supports high-DPI screens however, so if you have run it on one of those screens in the past, you may notice that it looks a lot better on those.

New features in QTranslate 6.4 include support for Microsoft's translate API, and support for Khmer and Telugu languages, and Arabic, Bulgarian and Croatian OCR languages.

QTranslate supports speech recognition. The feature was introduced in version 6.1 of the application. It is another option to enter text that you want translated. Instead of copying and pasting, or typing, the text, you activate speech mode to use your voice instead.

The program may detect the language automatically that you use, and there is a hotkey for quick activation of the feature.

Another handy new feature is support for XDFH dictionaries. You can download any of the 308 dictionaries that are offered on the QTranslate website and integrate them into the Windows software. Instructions on how to do so, and download links, are provided on the official download page on the website.

Previous versions of QTranslate added the following feature set to the program:

There is a lot to like about QTranslate, but one feature that stands out in my opinion is the ability to display multiple translations. This can be useful, as you may compare results and pick the right one from the listing.

QTranslate is a great translation software for the Windows operating system. It is available as a portable version or installer so that you may place it on a portable storage device and carry around with you if you want.

The application gets updated regularly, and it is probably one of the best options to switch between different translate services quickly to compare results.

Now You: Which translate service or program do you use?