A look at Stacer system optimizer for GNU/Linux

There are countless tools that claim to optimize your Windows system, but not nearly as many for GNU/Linux. Now, many GNU/Linux power users will likely say something like, "If you're using Linux you should be able to do all of these things on your own anyway, try using commands like X or Y," however, with popularity in GNU/Linux growing, there are likely many users out there with less experience who could make use of software like this. That's where Stacer comes into play.

Stacer essentially is Bleachbit and other tools like Advanced Systemcare by Iobit, combined. It features things such as a startup programs manager, process management / task manager, uninstaller, and a system cleaner, all in a very neat and tidy interface.

I was actually very pleasantly surprised with how organized and easy to navigate the UI was; everything was in easy to find and easy to understand locations, and it didn't have many distractions or confusing elements to it.

Running a few tests all seemed to go very smoothly, and very quickly. I installed a few applications I had no use for, and then uninstalled them using Stacer, which went without a hitch. I also ran a system clean, and again was surprised at the speed and efficiency of which Stacer took care of the task at hand. 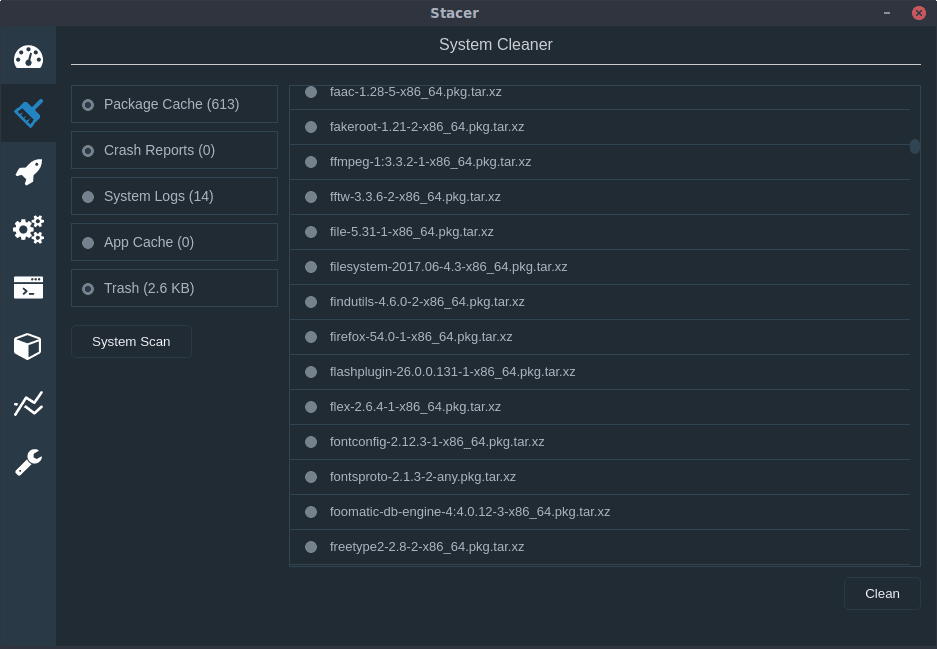 Visiting the Stacer Github page gave multiple links to installer downloads for Stacer, such as a .deb file for Ubuntu / Debian based systems, .rpm's for many other distributions, and even a .pacman file was included. Granted, Arch/Manjaro/etc users can simply install Stacer from the AUR.

Now, one thing to note is that it appears that Stacer absolutely requires SystemD. On the main page for Stacer it shows that as a requirement for running Ubuntu 14, you must install systemD, so be aware that if you are running a system that does not use systemD, there is a good chance you may be forced to use it.

Overall, I could see Stacer being extremely useful for casual / new GNU/Linux users who aren't quite used to managing their system on their own yet through more typical means. It has the tools, the easy to use UI, and no extra frills to confuse people. I personally highly recommend it for users who aren't quite comfortable using a terminal or getting their hands too dirty; or even those who just prefer a nice UI to work with instead!

Article Name
A look at Stacer system optimizer for GNU/Linux
Description
Stacer essentially is Bleachbit and other tools like Advanced Systemcare by Iobit, combined. It features things such as a startup programs manager, process management / task manager, uninstaller, and a system cleaner, all in a very neat and tidy interface.
Advertisement