The Windows 10 Creators Update comes with a new feature that allows you to restrict software installations to apps from the Windows Store.

The feature looks similar on first glance to Microsoft's Windows 10 S operating system that the company introduced last week. While similar on paper, things are not nearly as identical when you take a closer look.

The locked down nature of Windows 10 S, and the "allow apps from the Store only" option of other editions of Windows 10 have two core differences.

First, that system administrators may switch between the locked down state and allowing Win32 program installations on non-Windows 10 S systems. Second, that software that was installed prior to making the switch is not blocked and continues to run.

You may set it up in the following way:

You can switch the preference back at any time, and may set it to "warn me before installing apps from outside the Store" as well. Windows 10 displays a notification in this case with the option to bypass the filter and run the selected program on the PC. 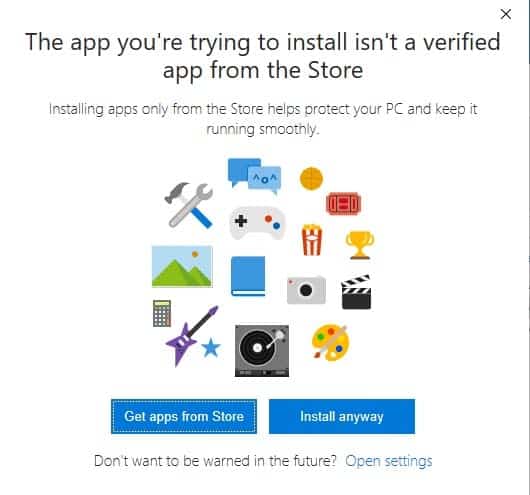 If you set it to "allow apps from Store only", you get the same notification but without the install anyway option.

Allow apps from Store only analysis

The feature is more or less broken in current stable versions of Windows 10, and works better in the latest Insider builds.

If you enable the feature on stable versions, you will notice that some activities bypass the security feature entirely.

You can run portable programs for instance without them being blocked, or install and run Steam applications.

Most program installations are blocked on the other hand by the installing apps feature, but that is obviously not enough if standalone executable files are not blocked. This means for instance that malware, which usually does not get installed but is run right away, won't get blocked by the feature at all.

If you make the same policy change on the latest Windows 10 Insider build however, you will notice that Microsoft improved the functionality in this regard.

Portable programs for instance are blocked, or at least those that I tried were blocked, while they were not when I ran them on a stable version of Windows 10.

The new version is not perfect yet though, as you can still install Steam games for instance and play them, even with the system locked down to installing apps from Store only.

Work will continue on the Store lockdown feature of Windows 10, but it may take until the release of the next feature update for Windows 10 in September 2017 before improvements hit the stable channel.

The feature is somewhat interesting for day to day use, as you can lock down the execution of Win32 programs somewhat using it without being locked down completely. Since you can flip the preferences switch whenever you need to, you can still install or run programs that would otherwise be blocked.

Now You: Do you think the "allow apps from Store only" feature is a useful one?