SSLPersonas is a free browser add-on for the Firefox web browser that highlights a site's security status in Firefox by changing colors of the theme.

The Firefox web browser displays up to two indicators in its UI that reveal the security status of the connection.

It displays a lock icon if the connection is secure, and reveals whether the certificate used by the site is using standard or extended validation.

Firefox users may click on the i-icon next to the lock to display additional information (the connection is secure), and look up certificate information with a couple of additional clicks. 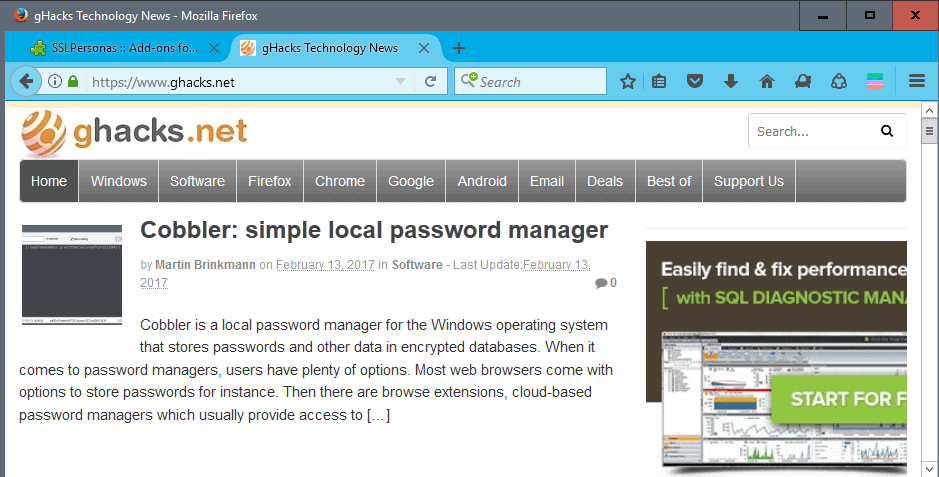 SSLPersonas is not the first extension for Firefox that improves the visuals of connections and security states in the web browser.

We reviewed the add-on Safe back in 2012 which changed the color of tabs in Firefox based on the state of the connection. Safe was removed by its author from the Firefox add-on repository however.

Green and blue indicate secure connections, while any other color an unencrypted connection that is not secure.

The only option provided right now by SSLPersonas is to change the theme for insecure connections from white to red. Insecure meaning all plain HTTP connections.

The visual element that SSLPersonas adds to Firefox may help inexperienced users when it comes to determining whether a connection is secure. It is not as easy to overlook as the smaller lock icon or that https is used as a the protocol in front of the URL.

Some users may not like the fact that it changes the theme of the browser. Since it does that, you cannot really use any other theme in Firefox while the add-on is active.

I think that Safe did a better job at finding the right balance between visualizing a connection's security and the impact that visualization has on the browser's look and feel.

SSLPersonas is a handy extension for Firefox nevertheless, especially for users who feel safer when the security status of connections in Firefox is better highlighted in the browser.

Now You: How would you go about highlighting connection security?