Of Apple and Windows: Gartner's OS forecast is useless

You have probably read about Gartner's latest forecast already which sees Apple shipping more combined devices than Microsoft / Windows in the year 2017 and the following years.

If you have not, you can read about the prediction on the Computerworld website. Basically, what Gartner forecasts is that Apple will ship more iOS and OSX devices in total than Windows devices in the years 2017, 2018 and 2019.

If you take the 2016 figures, which Gartner provides, you see Windows in second position with about 260 million devices shipped. Apple shipped only 248 million devices in total in the year and came in third. The statistic is dominated by Google Android which shipped on the majority of devices in 2016. To make this clearer, the 260 million Windows devices are 11% of the market.

Windows devices dropped in comparison to 2015, and so did Apple devices in 2016. Gartner forecasts that Apple will see a strong year 2017 with device shipments picking up again, while Windows shipments won't see much change in the coming years.

The statistic is problematic for a number of reasons. First, it takes PC, 2-in-1, tablet and phone shipments and adds them all up together. This ensures that you get the biggest number possible, but it does not really tell you anything about how well an operating system does or will do.

If you would just look at individual device types, you'd see that the bulk of Apple's shipments falls into the iPhone category. For Windows, that is a dead category more or less.

The situation changes if you take PCs on the other hand. Apple is not doing really well in that category, while the bulk of Windows devices fall into that group.

Windows is doing well in the PC category first and foremost, and it is dominating it. Apple is obviously doing better than Windows in the mobile phone category as Windows is a no-show there.

Second, even if you ignore this issue, you may notice that the "total devices shipped" figure does not tell you anything about how well a company is doing. Apple is making more money from devices that it ships than Microsoft or other companies shipping Windows products.

Apple has been quite conservative when it comes to innovation and releasing products, and if the company does not change that, or change other metrics such as price, then I cannot see it recover from a decline in sales.

For Microsoft, there are also some uncertainties. First, what about Windows Phone? Will Microsoft release the rumored Surface Phone in 2017 to the public? I cannot see it capture much market share initially, unless it is really innovative or offers great value for its price.

Then, what about Windows 10? Microsoft's push to Windows 10 will continue obviously, but the company has yet to show how this will benefit the company financially. With 10% of Windows customers still on Windows XP, an operating system that Microsoft stopped supporting three years ago, it is clear that Microsoft will have a hard time convincing Windows 7 users to upgrade to Windows 10.

Why? Because Windows 7 is probably as popular as Windows XP, and it is supported for another three years.

Lastly, the figures may not take into account the enthusiast market. PC users can build their own devices from scratch. While there are not any information on how big that part of the market is, it is probably something that one should not forget.

The forecast does not tell us much. It tells us that Gartner believes that Apple will ship more devices than all companies shipping Windows devices because Apple will recover from declining sales while Microsoft won't. That's the extend of the forecast.

I predict that Android device shipments will overshadow the combined Windows and Apple shipments, but that too does not tell us much that we don't know already either.

In the end, it does not really matter if Apple beats Windows or vice versa. Apple is doing well, even though it seems to be in decline, and Microsoft is also doing well.

Now You: What's your take on these stats? 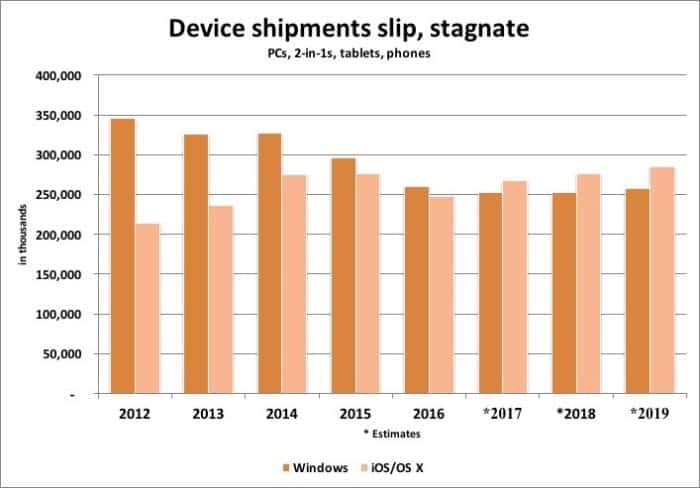