Microsoft released an update for the built-in Photos application for Windows 10 yesterday that brings editing, drawing, and interface enhancements.

The Photos app for Windows 10 is a basic photo viewer and editor. Like many other apps that ship with Windows, it is sufficient for basic tasks but neither feature-rich nor super fast when it comes to opening and displaying photos.

The Photos application has been released yesterday for Microsoft's Xbox One as well. 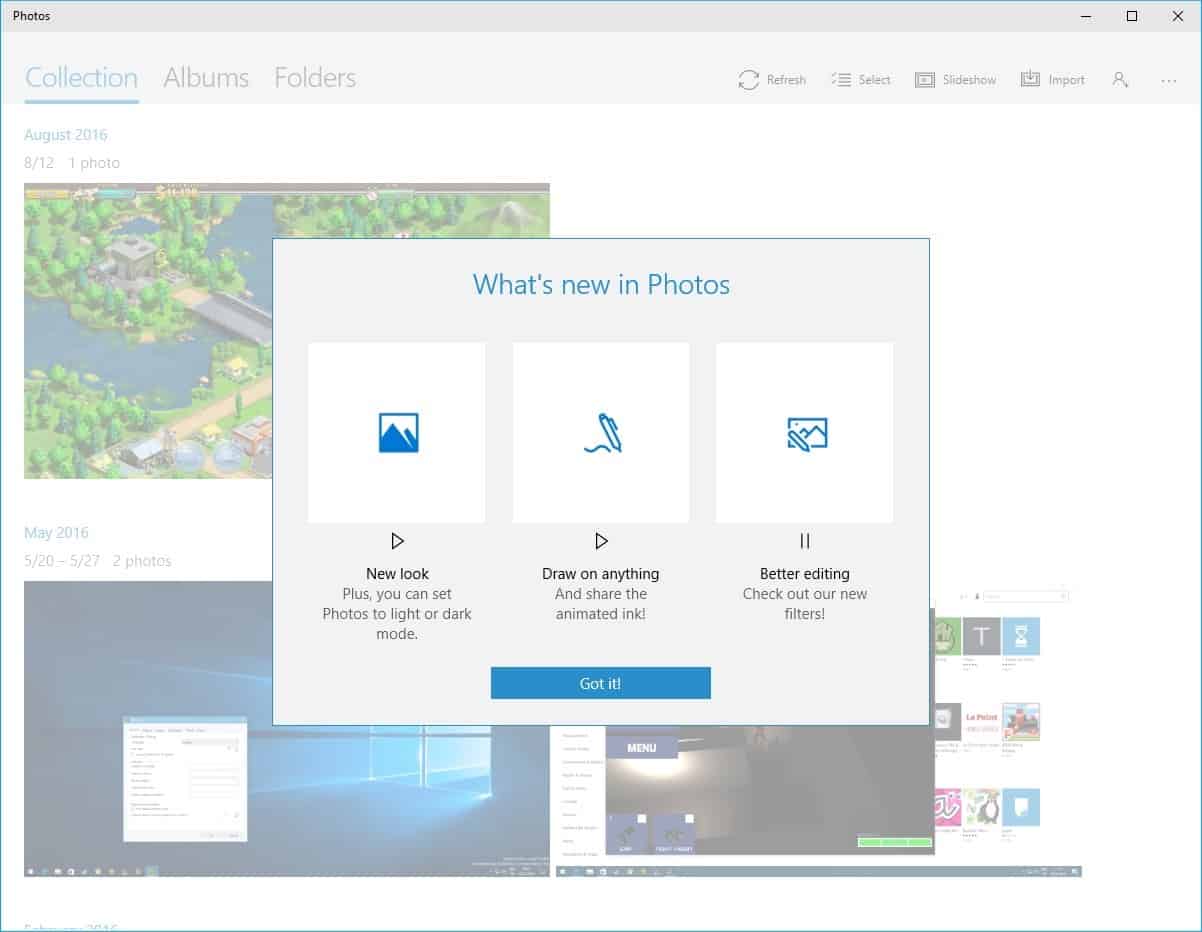 You get a short "What's new in Photos" prompt the next time you open the Photos app on Windows 10 after it has been updated. 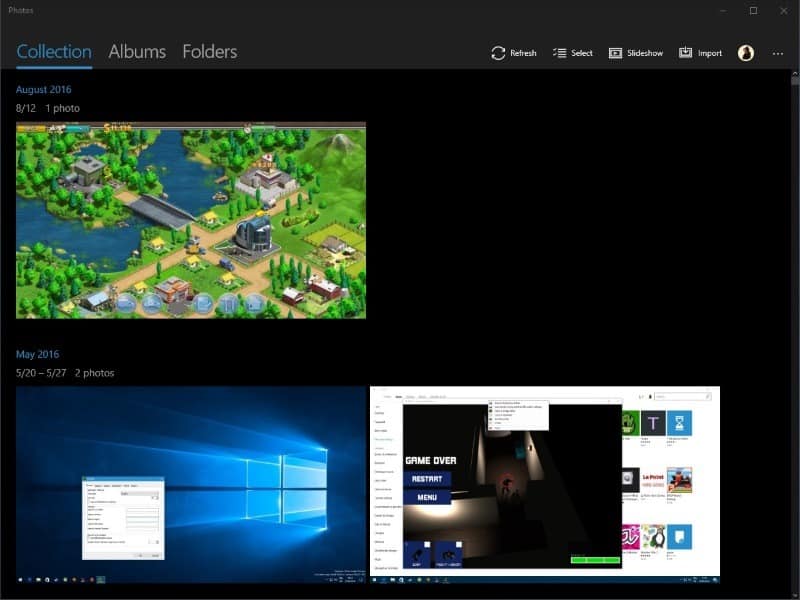 The new version of Photos ships with options to switch between a dark and light theme.

If you have used Photos before, you know that it uses a light theme by default. You may switch that to dark by opening the Settings, and enabling the option there.

You may notice as well that the interface has changed in another way. The navigation bar is now displayed horizontally instead of at the side. 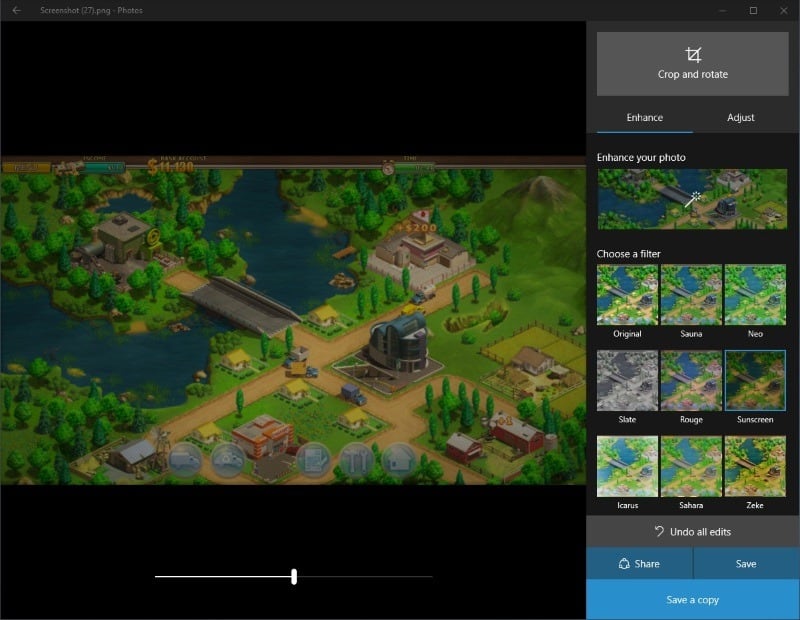 If you like to edit your images using Photos, you may notice an improved layout of the editing interface as well.

Common operations such as crop are now focused in the edit window, while others have been moved to the enhance or adjust areas.

Microsoft added a whole bunch of new filters to the Photos app that you can apply with a single click or tap. 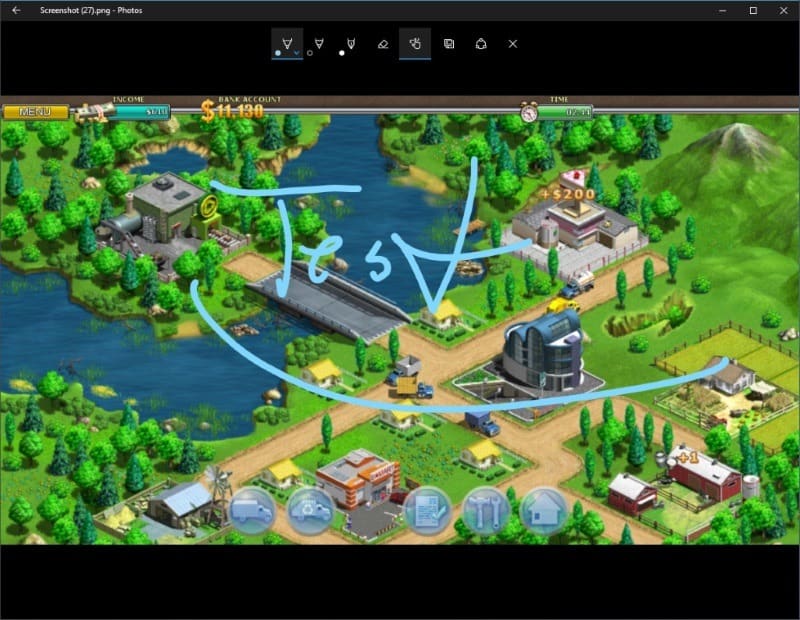 Drawing has been a focus on Windows 10, and drawing capabilities of the Photos app add to that.

You can draw using the mouse, a stylus pen or touch to draw on images.  The feature supports three different pen types, an eraser, and the usual sharing options to services like Facebook.

You may create animations when drawing on photos.

One interesting drawing option is the ability to draw on videos, and not just on images.

You can also draw on videos, and the ink will play back at the right places when others view it. Use the pen to mark up the peewee league football video just like the pros. Or give stage direction for the school play. Or just add funny comments, thought bubbles and moustaches to lighten up a goofy video.

If you use Photos as a basic image viewer, then you may not  benefit much from the new capabilities that the update introduced.

While you may like the restructured interface, or the dark theme option, there is little else that changed that improves image viewing.

The new editing and drawing options add to the app, even though some of the options may be better suited for the new Paint 3D application in my opinion as you get some overlapping features now.

Now You: Which image viewer do you use predominantly?