Microsoft plans to ship a new Share UI (user interface) with next year's Windows 10 Creator Update that will likely come out in March 2017.

While I hardly ever use sharing functionality -- other than copying share content to the clipboard -- others must use it actively considering that nearly any web browser or operating system ships with share functionality these days.

Windows 8's and 10's share UI up until now opens all share options in a sidebar. You may then pick one of the available options from the sidebar to share content using that channel.

Windows 10's Share functionality is limited to what the operating system itself and Store apps provide. 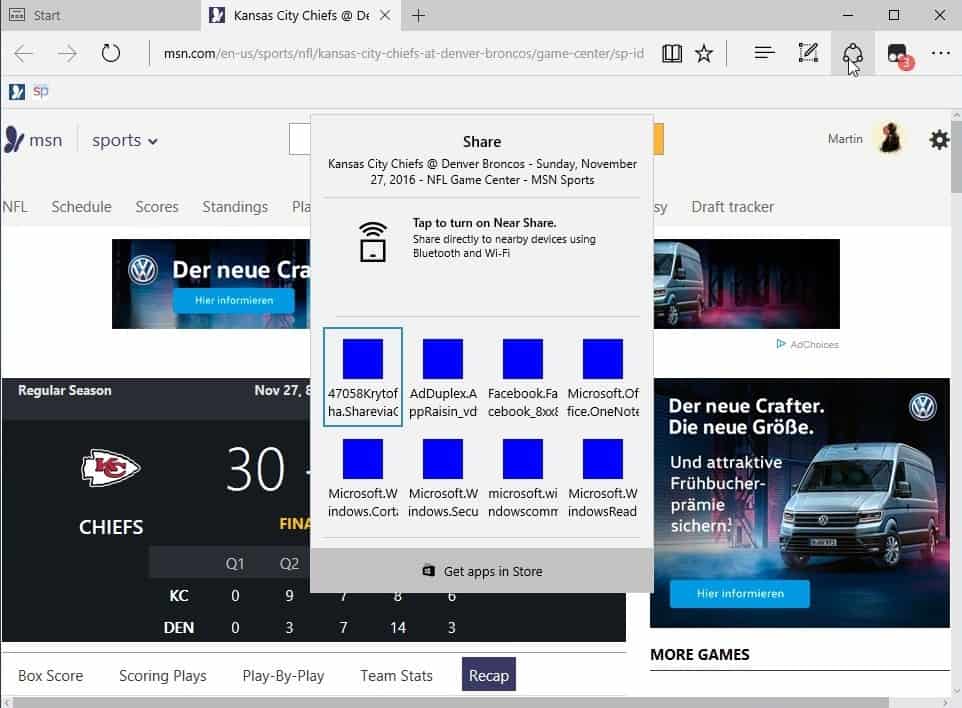 The new Windows 10 share UI is not ready yet for prime time. This is the reason why it is not enabled by default.

Note: The following Registry tweak works only on the Fast Ring Insider channel of Windows 10 currently.

The new Share UI on Windows 10 is enabled right after you have made the change. As you can see on the screenshot above, it is not yet fully functionality.

The main issue right now is that it displays application IDs instead of names so that it is not always clear what a share option does. This will be resolved in future updates however.

So what is different?

The core change is that the Share UI opens as an overlay window on the screen instead of in the sidebar. This should mean less mouse or hand movement to make use of share functionality.

Another difference to the current Share functionality on Windows 10 is that Microsoft seems to be working on a new feature to share content directly to other devices running Windows 10 that are connected to the same network (using Wi-Fi or Bluetooth).

You could share content from your desktop PC to your Surface device, or to one of those rare Windows 10 phones.

The new Share UI will ship with Windows 10 if things go as planned. The switch should not be too confusing to users considering that this is not a drastic change, and that functionality remains the same for the most part. (MSPowerUser via BornCity)

Now You: Do you use share functionality in browsers or your OS?