DownThemAll 3.0.2 is the latest version of the popular download manager for the Firefox web browser that brings along with it e10s compatibility and more.

DownThemAll is probably the most popular download manager add-on for the Firefox web browser with more than 1.1 million users.

It integrates itself in the right-click menu of Firefox and through other means, and lists all links, and pictures and media, found on the page it is activated on. 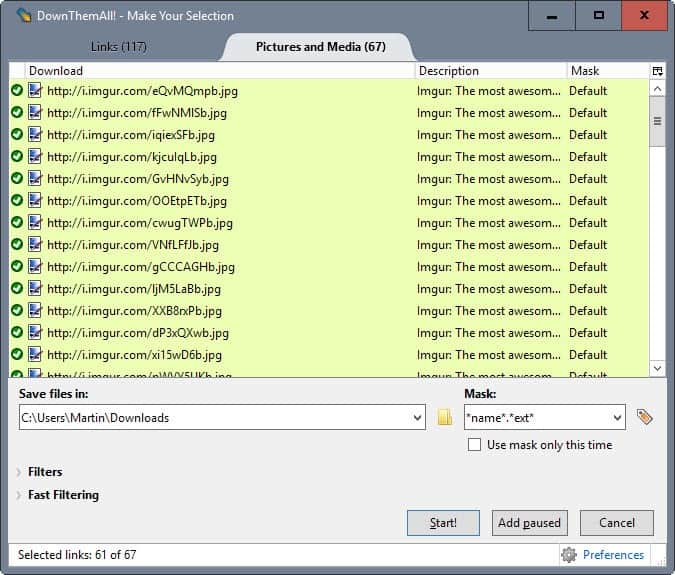 E10s, or multi-process Firefox, is slowly being integrated into Firefox Stable. Since many add-ons are not compatible yet, it is not enabled for users with add-ons by default, but only for a percentage of users without any add-on installed.

The most recent version of DownThemAll supports e10s which means that you may run it in Firefox versions with e10s enabled.

That's a big step for any add-on as it ensures the add-on will remain compatible with future releases of the Firefox web browser.

While it will take some time before Mozilla will enable the multi-process architecture for Firefox installations with add-ons, that time will come and any add-on not compatible then will stop working when that happens.

Support for Firefox's multi-process architecture is without doubt the main feature of the latest DownThemAll version. It is not the only one though as there is a bunch of others that users may find useful.

First, DownThemAll is restartless now which means that you can install it without having to restart Firefox to complete the installation.

Other new features include support for custom file names and file renaming during and after downloads of files, asynchronous input/output, advanced queue searching and filtering options (by size, status, name..), or HiDPI icons.

Advanced users may find new power user options useful. You may for instance set up a DownThemAll only proxy using about:config. This is mentioned in the release notes, but I could not find any documentation on that on the developer site.

You can check out the full release notes on the official site.

When Mozilla announced that major changes would come to Firefox's add-on architecture, it was DownThemAll's author Nils Maier who opposed the idea vehemently and hinted that this could mean the end of the extension for Firefox.

The new release makes DownThemAll compatible with current changes happening to Firefox (multi-process architecture). There is still XUL and XPCOM deprecation looming on the horizon though.