SnailDriver is a new program to check for, download, and install device drivers on all supported versions of the Windows operating system.

Driver updates may introduce new features or improvements to installed hardware. A common example are upgrades to the video card driver which improves support for certain video games or performance in general.

While that is the case, unless you are a gamer or require other up to date drivers, you may have no need to install driver updates as soon as they become available, or ever.

Programs that check for driver updates automatically have been designed to improve the process of updating device drivers on machines running Windows.

SnailDriver is a new beta program for Windows that does what programs like DUMo, Drive the Life, or SlimDrivers have been doing for years: check for driver updates, and if the user desires to do so, download and install these updates on the local machine. 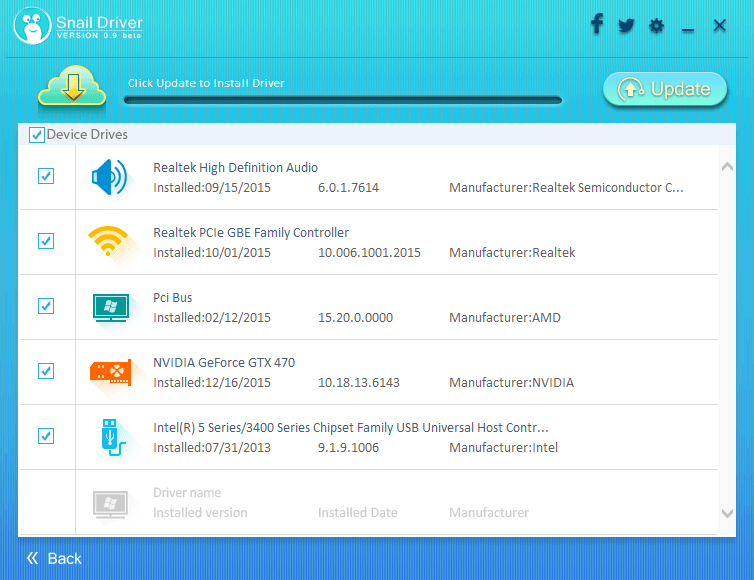 SnailDriver is a free program that is compatible with all versions of Windows supported by Microsoft (which means no XP, but Vista and newer versions). The program is ad-free, and the developers promise that it will be free to use for life.

The program is provided as an .exe or .msi installer, and will display a big scan button on start which you need to press to let the program scan the system hardware, installed drivers and whether driver updates are available.

Whenever I ran programs like SnailDriver in the past, they found mostly updates for motherboard related drivers, and SnailDriver did not make an exception here.

One core issue of SnailDriver is that it does not display information that allow you to quickly compare the installed with the new version the program found. All it displays is the name of the device, the installation data, the installed driver version, and the manufacturer.

It does not display the release data of the new driver or the version of it, and there are not any options to open a page on the manufacturer's site quickly to compare versions manually instead.

This is a problem, as you may want to fire up a web browser, open the manufacturer's site manually to compare installed and new versions before you make any decision on installing the driver update.

Considering that you are on the manufacture's site then anyway, you may as well download and install the driver update from it directly instead.

The options the program ships with let you change the download directory for drivers, but that is about it right now as well.

SnailDriver is a beta program and it shows when it comes to functionality. While the actual scanning worked well during tests, the developers should consider adding more information and research options to the program before releasing the first stable version.

Especially a comparison of the installed driver with the found new driver is a must for a program of its kind.

Now You: What's your take on driver update software?

Martin Brinkmann is a journalist from Germany who founded Ghacks Technology News Back in 2005. He is passionate about all things tech and knows the Internet and computers like the back of his hand. You can follow Martin on Facebook or Twitter
View all posts by Martin Brinkmann →
Previous Post: « Skype Co-Founder's Wire app gets end-to-end encryption
Next Post: WinToHDD: install Windows without DVD or USB »