Microsoft announced plans last week to increase storage for OneDrive for Business customers to unlimited from the previous 1TB limitation.

If that sounds to you, it is because the company announced the same feature for all paying Office 365 customers some time ago only to revoke it afterwards again.

Not only did Microsoft reduce storage for paying customers from unlimited to 1TB of storage on OneDrive, it furthermore canceled the 100Gb and 200GB plans on OneDrive, and replaced them with a 50GB plan that cost the same amount of money as the 100GB cost previously.

Free users were affected by the changes as well, as their free storage was removed from whatever they got to 5GB.

Microsoft in December changed its mind slightly in regards to free users by letting free users keep their 15GB or storage plus the 15GB extra camera roll bonus if they'd "sign up" for it. 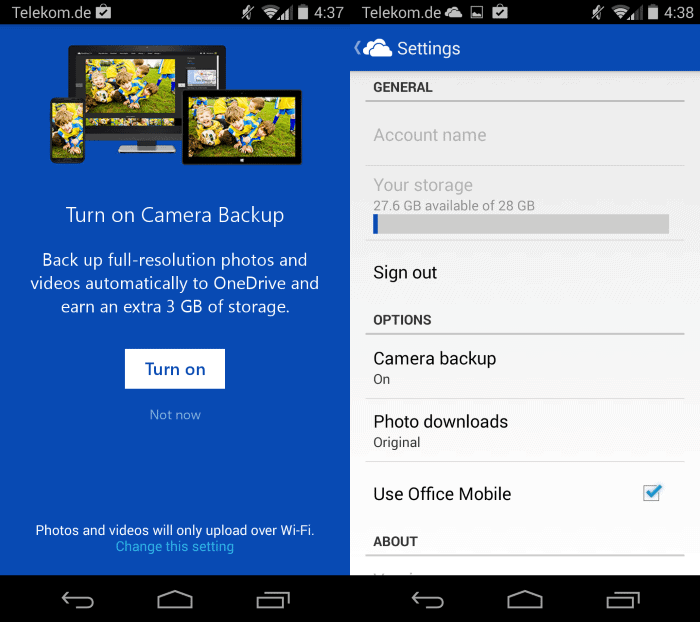 The announcement made waves on the Internet but will likely be overlooked by many existing OneDrive users on the free tier still.

The changes to OneDrive for Business storage were announced last week by Microsoft corporate vice president for OneDrive and SharePoint Jeff Teper on the official Microsoft Office blog.

Microsoft plans to roll out a storage increase for OneDrive for Business plans at the end of the month (December 2015). Storage will be increased from 1TB per user to 5TB per user, and the company plans to complete the rollout by March 2016.

There are some limitations though. Unlimited storage is only provided for organizations with more than five people subscribing to one of the following OneDrive for Business plans:

Teper notes that organizations can request a storage bump beyond 5TB by contacting Microsoft support.

All other OneDrive customers, subscribed to all Enterprise, business and standalone plans not mentioned above, wont have their storage quota increased beyond 1TB.

The same blog post mentions other changes. One is the release of the OneDrive for Business new generation sync client that is available for Windows and Mac computer systems.

It features improved reliability and performance, selective sync, support for large files up to 10GB in size, and no 20,000 file sync limit as it has been removed by Microsoft.

IT professionals can deploy the new sync client for OneDrive silently for end users. One limitation us currently that the client does not support SharePoint document libraries, but Microsoft plans to integrate those in the future.

That's one reason why the new sync client works side-by-side with the old client. Microsoft is working on "other important features" such as Office integration to support the co-authoring of documents and sharing scenarios.

The preview sync client will be updated automatically to the release version according to Microsoft.

The OneDrive mobile applications have received updates as well. Microsoft released a new OneDrive app for Windows 10 Mobile for instance and added support for offline storage to OneDrive for iOS (the Android app got the update in September 2015 already).

OneDrive customers who had their unlimited storage revoked by Microsoft are probably wondering why Microsoft decided to go the "unlimited route" once again, and why it decided to exclude them from the deal.

One possible explanation is that OneDrive for Business customers are less likely to take advantage of the unlimited storage offer but things don't really add up in the end, and Microsoft's timing of events does not really help either.

One could even come to the assumption that the company had to free up storage from regular paying customers to provide businesses with the extended storage opportunities.

Whatever the reason may be, OneDrive is quite the mess right now. (via Groovypost)

Martin Brinkmann is a journalist from Germany who founded Ghacks Technology News Back in 2005. He is passionate about all things tech and knows the Internet and computers like the back of his hand. You can follow Martin on Facebook or Twitter
View all posts by Martin Brinkmann →
Previous Post: « Microsoft puts Man-in-the-Middle adware on the banlist
Next Post: To improve its image, Microsoft needs to open up »