Mozilla is testing a new feature in Firefox Beta or up on Android currently that enables you to open links that you open in external applications in the background for later viewing.

The main idea behind the feature is to limit application switching, between lets say email program and web browser, to a minimum. Instead of switching to the browser while you are still using the email program, you can add all links you are interested in to a queue to open them at a later point in time instead.

Before you can start making use of the new tab queuing feature, you need to make sure the following two prerequisites are met. 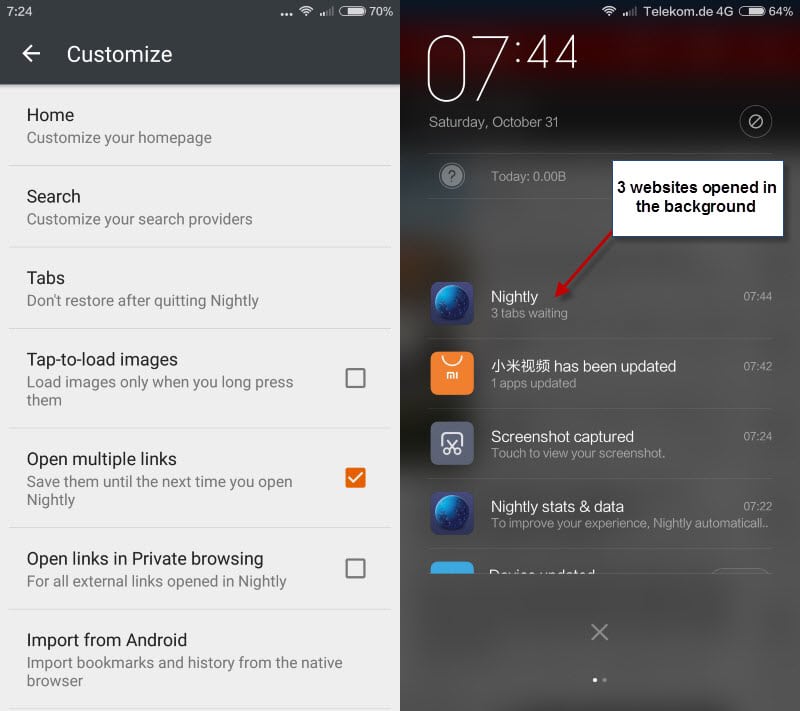 How that is done depends largely on your version of Android. On my version, Android 5.1.1 I had to open the Android Settings, switch to installed apps in the Settings, and tap on Defaults there to get a chance to change the default system browser to Firefox.

Once that is out of the way you can start sending links that you want to open to Firefox's tab queue so that they are not opened directly.

This is done usually by long-taping on the link which gives you an option to save the tab in Firefox or open it directly.

Depending on the application, you may not get that display however. Sometimes, it is enough to select to open the link in the default browser instead, and at other times, it is not working at all. This is the case for WhatsApp for example where links can only be opened directly.

The feature works similar to Link Bubble, an application that we have reviewed back in 2014. The core difference is that it is integrated in the browser now which means that you don't need to install third-party apps for it anymore.

Still, it is clear that it needs work as it is not compatible yet with all apps running on your Android device.

Previous Post: « Firefox 44: Do not Disturb for notifications
Next Post: Take control of WebRTC IP leaks with Statutory for Firefox »