These things annoy me in Windows 10 - gHacks Tech News
ghacks.net

These things annoy me in Windows 10

This is a personal post as you can see when you read the title. Windows 10 shipped less than a month ago and was available as a preview version months before that.

A core difference to previous Microsoft operating systems is the modular nature of the operating system. It is a work in progress even after the release of the final version, and new features will get pushed out regularly to it.

If you spend time working with the operating system you may have noticed issues doing so. Some may have been minor, other cosmetic in nature but some probably also major.

I have to admit that I did not run into major issues so far. The operating system works well for the most part, and the issues that I have with it mostly slow down my workflow when using the system. 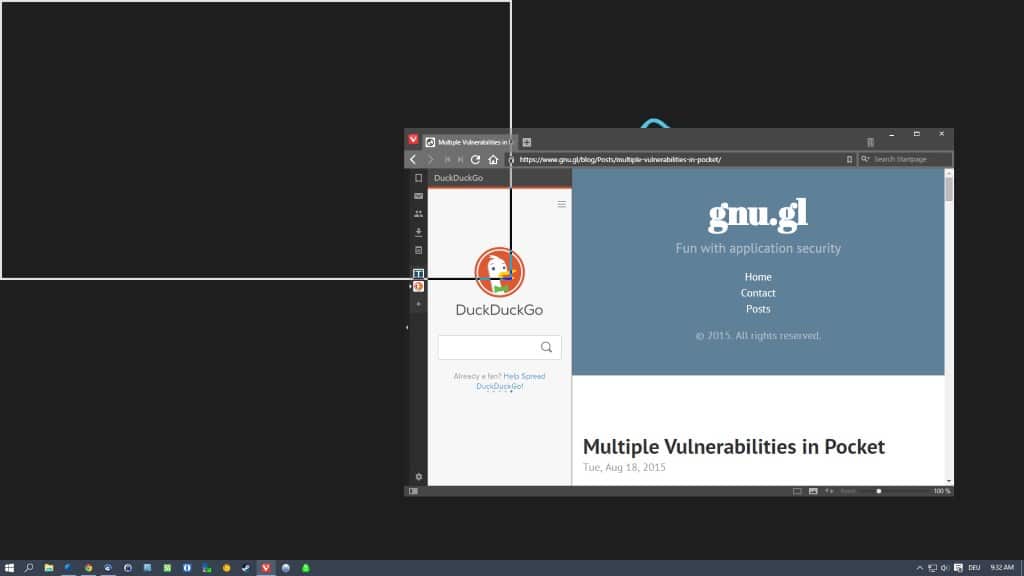 The new Aero Snap in Windows 10 changes that for the worse. While it looks improved on first glance, you can now snap windows to quarters as well, it is not something that I need.

It happens though that windows that I want to snap to the left or right side end up being snapped to the upper left or right corner instead so that I have to readjust them again to make them take up half the screen space.

There is no option to block this from happening as you cannot disable the hot corner functionality in Windows 10 anymore.

This may also be an issue on multi-monitor systems when you drag windows from one to the other. If you are too slow, you may end up pinning them instead.

The one feature that I like about the new Aero Snap is that it is no longer always 50/50 when you pin windows to the side. If one of the windows takes up more space, lets say 60%, the other will automatically take up the remaining 40%.

The Start Menu is better than that of Windows 8 if you are a desktop user. While that is the case, it lacks left-side customization options. 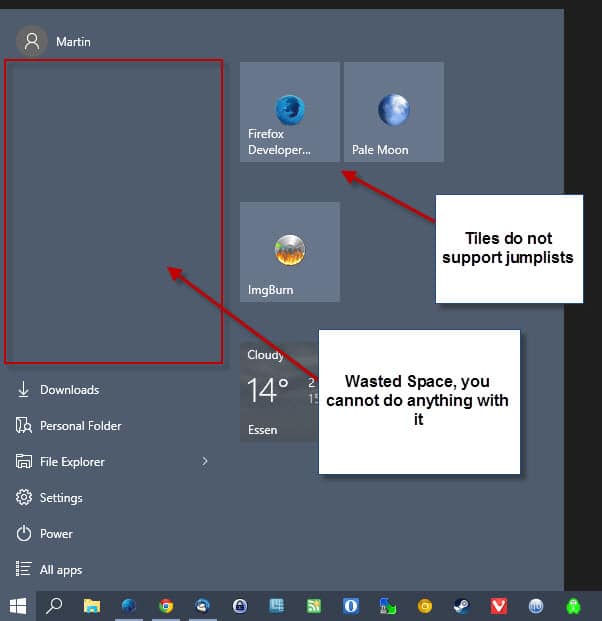 If you disable the "recently added" feature, which I have done, you end up with a block of empty space on the left that you cannot use for anything.

You cannot pin items there or do anything with it. This is a problem, especially since tiles don't support jumplists.

While you can pin any program you want as a tile, it would be useful if you could pin often used programs on the left side as well to make use of jumplists.

In addition, I'd like to see a text only option for tiles as I don't need those big rectangular boxes as I'm not using a touch monitor.

The System Tray area needs work as well. Why is it not possible to remove certain icons from it, and show others permanently on it anymore?

For instance, I do not need the Action Center there or the language selection menu. I'd like to see other icons there permanently however and not just when I click on the arrow to display them.

Unless I overlooked the option to hide and show icons, it is not there anymore.

Update: Found it. Microsoft added the option to the Settings. You find them under Settings > System > Notifications & actions > Select which icons appear on the taskbar now and Turn System Icons on or off.

All Settings should be accessible under one central location. Juggling between the new Settings application and the classic Control Panel is not comfortable and at times confusing, especially since you cannot search both at the same time.

Microsoft announced plans to move everything to Settings, and one suggestions that I have for that is to keep the old shortcuts and options when that happens.

Hitting Windows-Pause to open the System control panel applet is useful and fast for instance.

While we are at it, add a Settings layout for Desktop systems as well. What I mean by that is that Settings in its current form is optimized for touch. Big buttons, big fonts and few options and settings per page.

Add a desktop theme that displays more settings on a page, reduces the size of buttons and fonts, and streamlines it more for users who want fast access to settings.

Generally speaking, I'd like to see more customization options in the operating system. The forced white title bars that Microsoft addresses in the most recent Insider build are a good example of that.

Now You: Have you encountered issues while using Windows 10?

Article Name
These things annoy me in Windows 10
Description
A list of Windows 10 annoyances; features that annoy me. It is a personal list of things that I dislike when it comes to Microsoft's operating system.
Author
Martin Brinkmann
Publisher
Ghacks Technology News
Logo

Previous Post: « Windows 10 Build 10525 ships with improvements, and bugs
Next Post: How to be a Windows 10 Insider without getting Insider updates »