Microsoft pushed out Windows 10 build 10240 yesterday to Windows Insider users which is the RTM build of the operating system.

Along with the announcement came the claim that the new default browser of the system, Microsoft Edge, is blazing fast and beating Chrome and Safari on JavaScript performance benchmarks.

Microsoft stated that Edge was beating Chrome on Sunspider by 112%, on Google Octane by 11%, and on Apple JetStream by 37%.

No mentioning of other browsers such as Firefox by the company; reason enough to run the tests on a local system using the following web browsers and specs: 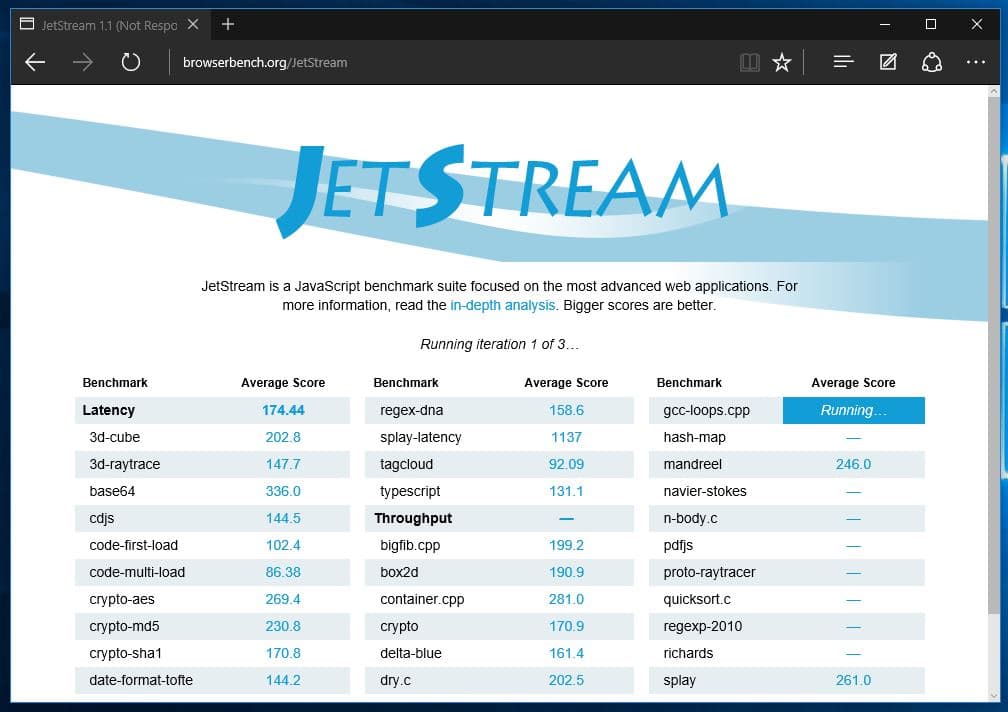 All web browsers were run with default configurations.

The main specs of the machine

The computer was idle while benchmarks were run. Still, some results were puzzling, for instance that Chrome Stable beat Chrome Canary in some benchmarks, that Firefox Stable performed better in all benchmarks than Nightly, or that Pale Moon failed on Apple's JetStream benchmark (it got stuck while running the cdjs test).

Most results are fairly close when you compare them but there are a couple of exceptions:

There is more to a browser than JavaScript performance, especially if the differences in performance are not that noticeable in the real-world.

Microsoft has been right that Edge performs better than Chrome in the browser's the company selected for comparison. It did not perform as well in others though and here it is Peacekeeper more than any other benchmark where it performs badly.

Now You: What's your take on Microsoft Edge and performance in general?

Previous Post: « How to make Firefox or Chrome the default browser in Windows 10
Next Post: Latest Vivaldi browser build ships with UI-less mode »