Google Maps' directions feature works considerably well most of the time. It can be quite useful to plan a trip but also when you missed an exit or need to re-route, as it can update direction information based on your location or another location you specify.

While you do get traffic information when you use the directions feature, those were only displayed on the map itself but not when you were in the navigational mode it offers.

The feature works in two different ways. In the first, traffic information are immediately displayed to you once you enter your destination in the app.

The application informs you about traffic jams, construction or any other obstacles that may slow you down on your way to your destination. In addition to giving reasons, it highlights by how much you are slowed down if you take a particular route.

The information are updated while you are following the directions Google Maps provides you with. You may receive congestion alerts that include a delay estimate so that you know what you are getting yourself into. 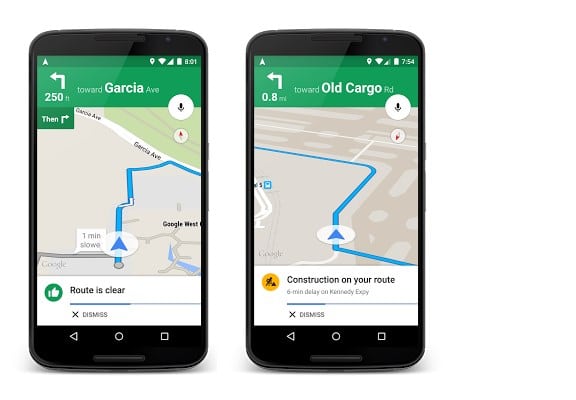 Google Maps may suggest alternative routes while you are driving, and each alternative includes explanations a reason why it recommends to take that route. Explanations given may highlight traffic incidents on the original route or simply that the alternative route may get you faster to your destination , for instance because of less traffic.

So, instead of just being told that another route is faster, you get the reason delivered right next to it which may help convince you take the alternative route to your destination.

It appears that the feature is still being rolled out. Google makes no mention whether it is limited to certain geographical locations. Some Google Maps users may have had access to the feature for a while already but for the majority of users it should be new.

The functionality seems similar to what Waze offers, a company that Google acquired in 2013.

Now You: Do you use an app for traffic information and directions?