D-Vasive alerts you when Android features such as the microphone get enabled - gHacks Tech News
ghacks.net

by Martin Brinkmann on October 24, 2014 in Google Android - 4 comments

Whenever you install an application on an Android device a list of permissions that it requests is displayed to you first. It is necessary to agree to those permissions to install the app.

While that is true for apps that users install directly, information about system apps and pre-installed applications by device manufacturers are not as they are already on the device when it ships.

The camera and microphone permission group for instance is required when an app wants to use the phone's camera or microphone. You'd expect a camera app to request that permission, but not necessarily that it will use the microphone as well, for instance to record what is being said in your vicinity.

Apps are available in store that let you mute the microphone for example, but that still requires you to do so manually.

D-Vasive is a new application by John McAfee that is available as a free and paid version. The core difference between both versions is that the free version notifies you about apps that start making use of camera features such as the microphone or wireless Internet while the Pro version allows you to stop and lock these features.

The application can detect the following feature activations:

Whenever an application activates one of those features you will receive a notification about it. While you cannot block the activation using the free version, you at least know that it has been activated.

One shortcoming here is that you are not informed about the app that activated it directly. You need to tap on the notification or open the log manually, and tap on the specific time and data again to see which apps were running during the time the access was noticed. 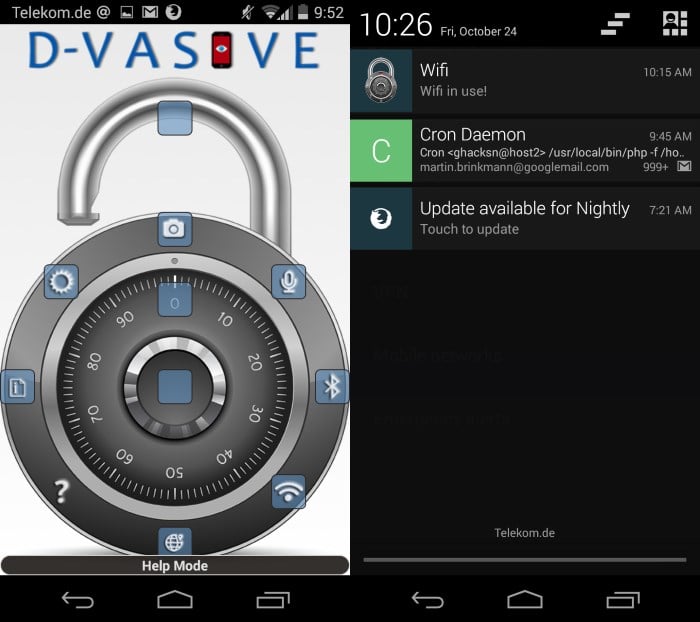 Apps are categorized by threat level. Another tap on an application displays that apps' full list of permission so that you know exactly what it is allowed to do. Explanations for each are available, and apps can be stopped or uninstalled right from that page as well.

Another feature of the application is the ability to run an application security scan. A list of installed and system apps are displayed on the screen sorted by threat level.  A tap on an app displays the permissions again with options to uninstall or stop an app.

Here is a video walkthrough of the main features:

D-Vasive Free alerts you whenever apps try to access core Android features. That's a good thing and users may want to run the app for a while just to see which apps activate which feature on their phone or tablet.

With that said, the free app is limited to notifications which means that you may need additional applications to lock down the device after all.

The app runs in the background at all times and will use battery because of that. You can modify the scan interval to reduce that though.

Previous Post: « Is your phone or tablet getting the Android 5.0 update?
Next Post: Test and Compare battery life with PCMark for Android »