How to launch apps in Windows 10 in full screen - gHacks Tech News
ghacks.net

How to launch apps in Windows 10 in full screen

If you have installed the Windows 10 Preview on a computer system or read about it online, you may know that Windows Store apps run on the desktop now if you are using a system with mouse and keyboard.

While it is still possible to enable the Start Screen interface -- instead of using the Start Menu as you cannot use both it seems -- apps that you run will run in windows by default.

That's not a big problem most of the time, but if you prefer to run some apps in full screen, a game for example to get that extra bit of screen space this way, then you may have wondered how to make that happen.

Update: Newer versions of Windows 10 come with window controls to maximize the window. There is also a new shortcut to switch any app between full screen mode and normal mode. Just hit Windows-Shift-Enter while the application is active to do so.

There is no full screen option when you look at the window control icons in the top right corner of the screen. While you can use the controls to maximize the app window, it is still running in a window and not full screen. 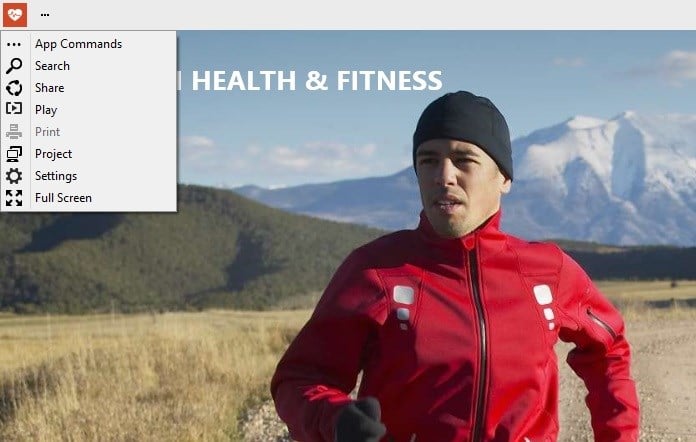 To run an app in full screen, you need to look to the top left area of the window instead. There you find the apps's icon and three dots.

It is easy to overlook the dots and the functionality they provide. When you click on them a context menu is displayed with several options:

Some of them such as Search, Share or Settings replicate functionality of the Charms Bar while others, such as Play, Project and Full Screen are new.

Play "plays the app on another device" while Project displays the projector options available on the system.

Full Screen finally switches to fullscreen mode so that no window title or the taskbar are visible anymore.

This setting is not remembered by Windows 10 currently which means that you will have to perform the same operation again to run it in full screen each time you start the app.

It is unclear at this point in time if Microsoft will implement an option, a Group Policy Control for instance, to enforce full screen for apps or select applications. It is unclear as well if a keyboard shortcut is available that can switch between windowed mode and full screen.