I'm spending quite some time on Reddit. During the Football World Cup, I monitored match threads and discussions closely for example, and one thing that became apparent quickly was that Reddit's current feature set was less than ideal for real-time updates.

Game threads would blow up to thousands comments with no option to distinguish between good ones that informed you about something happening, a gif of a foul or goal for instance, and comments that would express opinions or were used to discuss certain aspects of a game.

The thread starter on the other hand had to edit the information each time something happened, and that too was less than ideal as you had to refresh the page ever so often to make sure you did not miss out on anything.

Reddit Live changes that. It is adding a new option to Reddit that is not taking anything away from the site. There are differences however to regular threads on Reddit.

To create a new live thread on Reddit do the following:

Posting to a Live thread

Instead of being taken back to the subreddit the thread was created in, you are taken to a new interface that you can use to post updates to the thread.

A connecting message may be displayed for some time, and while you can start to write right away, you need to wait until you are connected to the live thread before you hit the make update button as the update may be lost otherwise.

Full Permission rights provide users with all rights including closing the thread or managing contributors, while the remaining rights offer only a subset such as posting to the thread.

Live threads are different in several ways to regular Reddit threads. Only select users can post to them, and no comment thread exists right on the same page. While it is possible to create a new discussion about a live thread, it means having to switch between two different Reddit pages at all time if you want to stay up to date and post comments as well.

With that said, it is clear that live threads are not meant to replace threads on Reddit but to complement them. They should work well under certain circumstances, for instance when a group of users has access to information that they post using a live thread.

With regular threads, only the thread starter is able to modify the main "description" while updates from other contributors are posted as comments instead.

It remains to be seen if live threads will be embraced by the community as it takes one essential part of Reddit out of the equation: user interaction.

As a Reddit user, I'd have preferred if comments would be allowed on Live threads directly as it feels more natural this way. 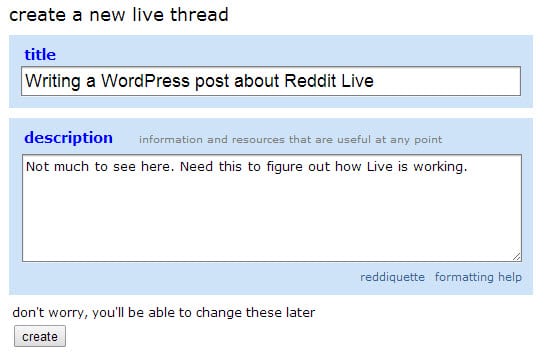