I'm a big fan of apps and services that offer relaxing sounds. From pure white noise applications to services that make available dozens of different sound loops that suite all tastes.

I have discovered quite a few apps, programs and online service that make available these sounds, from Sleepy Time for Android over YouTube's impressive list of hour-long relaxing sound videos to applications such as White Noise Sleep System for Windows.

TaoMix for Android looks like many other applications of its kind on paper. It makes available a set of relaxing sounds that you can play and mix on Android.

What sets it apart is how you control those sounds. While you can pick any of the sounds for starters, all sounds that you add are displayed as icons on the screen that you can move around to increase or decrease how strong they are based on how close they are to the cursor on the screen. 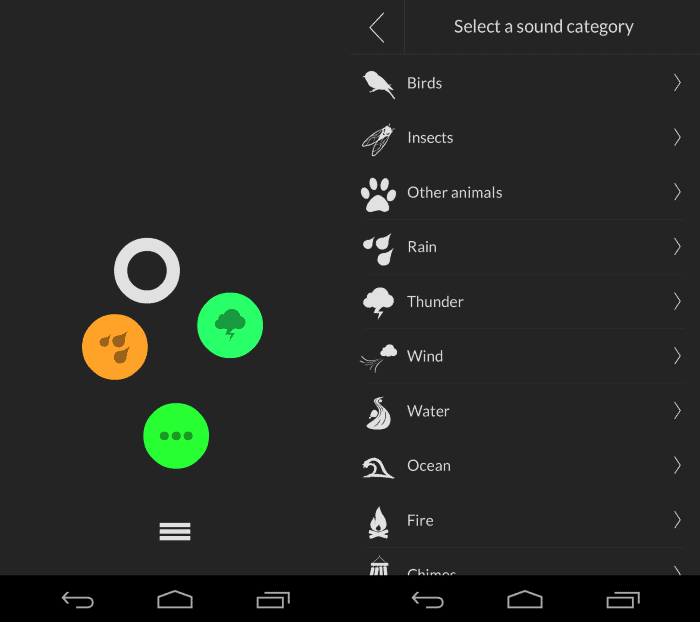 Here is how it works in detail. When you first start the program, tutorial screens are displayed to you that explain the core functionality.

If you follow the tutorial you add the first ambient sound right away and can move it around -- or the central cursor -- to get a feel for it.

You will notice that the sound gets stronger or weaker depending on proximity to the cursor.

The free version of TaoMix has a limit of three ambient sounds that you can mix together. It is also limiting the available songs, and while several great ones are available, rain, storm, white noise or wind, variations in each of these categories become only available if you purchase the full version of the app.

Another interesting feature of TaoMix is the option to set a sleep timer. If you set it, the app will play the select sound mix for the selected period of time and stop playback afterwards automatically.

There is also an option to control the playback volume from within the application, and save and load ambient mixes that you have created so that you don't have to re-create them whenever you start the app.

Playback continues in the background until you hit the stop playback button or the sleep time has been exceeded.

The quality of sounds is quite good, especially the looping is done well as it is not really possible to discern the end and beginning of a sound while it is playing.

The free version offers several great sounds that many users of the application will likely find sufficient. It would however be great if the app would offer a preview option for the sounds that are only available in the paid version.