Rapidshare was once one of the most popular file hosting websites in the world. It started to go downhill a couple of years ago when the company changed its business model significantly to a file owner paid hosting model.

While that was beneficial to users who only downloaded from the file hosting site, it limited paying customers to a certain transfer ratio per day.

Affiliates promoted Rapidshare prior to the change to downloaders who wanted to avoid slow downloads and bandwidth limitations. With the incentive gone, many turned to other file hosting services instead.

Less than a year later, Rapidshare announced that it would drop the unlimited storage plan that it had offered previously. Users who were over the limit suddenly faced the decision to pay a lot of money for their data storage, or turn to different hosting providers instead.

Then two months later news of layoffs made the round and things went downhill ever since. The last subscription plan change was announced September 2013 and things went quiet afterwards.

A notification is displayed to Rapidshare users who visit the website as of today. Rapidshare notifies its customers that it made the decision to terminate standard plans completely on the site 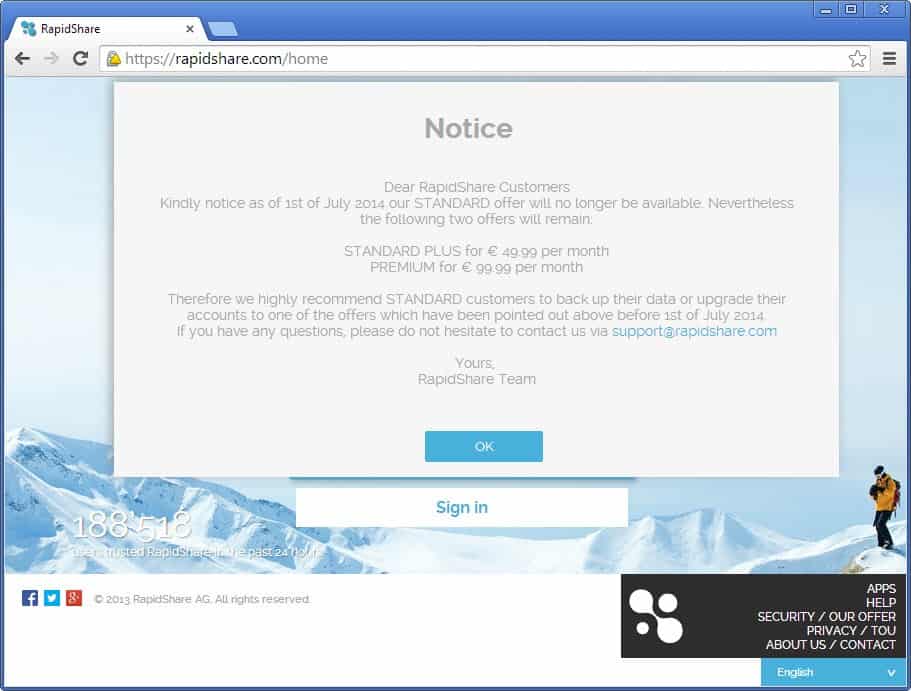 In addition to shutting down the standard plan as of July 1, 2014, it announced the pricing of the two plans it will offer in the future:

Last year, accounts were available for €8.21 and €16.43 per month respectively which means that account prices have been increased by the factor six.

It is not clear if they will provide the same benefits as the old accounts, or if storage capacities or bandwidth per day has been increased as part of the price increase.

The offering page highlights the same storage capacities and the new prices which is a strong indicator that Rapidshare increased the price for each paid account type but kept everything else as is.

The company recommends that free users upgrade their account to a paid account, or backup the data that they have stored on Rapidshare prior to July 1, 2014. Rapidshare did not mention what it plans to do with data uploaded by free account users after July 1. It is however very likely that it will be deleted.

The removal of the free account option may make sense from a business perspective. But a price increase by the factor six is surely going to cause a mass exodus by existing users of the service.

While I have no information about Rapidshare's financials, it appears likely that the majority of paying users will shut down their account and migrate to another file hosting company instead.

Considering that you get 10 Terabyte of storage on Google Drive for the price of Rapidshare's Premium account, it is almost certain that a lot of users will move their data to other companies

Article Name
Goodbye Rapidshare: shuts down free offer, increases pricing
Description
Rapidshare announced that it will shut down Standard free accounts on July 1, 2014, and that it will increase the price of paid accounts at the same time.
Author
Martin Brinkmann
Advertisement