I watched Microsoft's keynote yesterday and noticed that sites reporting about it were all reporting about it. That's why I decided not to join the party and write a summary of important announcements instead.

The benefit here is that you will get all the information you need in one single post, and not in dozens of them.

I'll be concentrating on the Windows operating system and not developer topics, although some will be mentioned here considering that Build is a developer conference after all and that there are features that are interesting to developers and end users alike.

Lets get started, shall we?

Microsoft did reveal Windows Phone 8.1 yesterday, and it appears to be a big update. Probably the most talked about new feature is Cortana, a digital personal assistant similar to Apple's Siri or Google Now, but seemingly more powerful than those.

It appears to be integrated deeper into the system and you get quite a few synergies with other applications right from the start. What's interesting here is that third-party apps can tap into Cortana as well so that you can use the assistant with them as well.

Cortana is beta right now and will be made available in the US first. Other countries will follow later.

But Cortana is not the only improvement. Microsoft added several enterprise features to Windows Phone 8.1 including support for S/MIME (email signing and encryption), support for corporate resources via VPN, EAP-TSL support, and enhanced MDM policies to lock down phone functionality for more enterprise control.

The phone gets a new notification center that works similar to those on Android and iOS. You can access it quickly with a swipe from top to the bottom to list all recent notifications and manage notification settings.

WiFi Sense is another new feature. If enabled, it will automatically sign in to open wireless networks. You can furthermore add information to the app such as your name or email which it will use to fill out forms automatically if that is required before the wireless connection can be used.

Data Sense and Storage Sense on the other hand provide you with information about the used bandwidth or storage on your device. You can set data limits and select where new media files get stored on the device (provided you have a SD card connected to it).

There is also a whole new set of personalization features. You can now change the live tile background to customize it with your own pictures, and customize the lock screen as well.

Last but not least, there is also Internet Explorer 11 along with its set of features such as reading mode or inPrivate browsing that ships with Windows Phone 8.1.

Microsoft has integrated a new work flow keyboard which improves the writing of text on the phone further by allowing you to swipe from character to character.

Here is a video that speaks about all the new features of the phone.

Windows Phone 8.1 will be available in the coming months. It will ship on new devices such as the pricey Nokia 930 or the Lumia 630 and 635, but also as an update for existing Windows Phone 8.1 devices.

Microsoft revealed Windows 8.1 Update officially yesterday. It is a feature update for Windows 8.1 that improves mouse and keyboard handling.

The update is made available next Tuesday on April's Patch Day for all users of Windows 8.

I reviewed the update before and suggest you check out the detailed review here. If you want a quick summary, here it is:

Here is a short video demo of the new features:

While those updates improve the handling if you are using a mouse and keyboard, what is not included in the update but has been announced may make you rethink what you think of Windows 8.

As I mentioned in January, Microsoft aims to bring a unified experienced to Windows regardless of the devices it will run on. 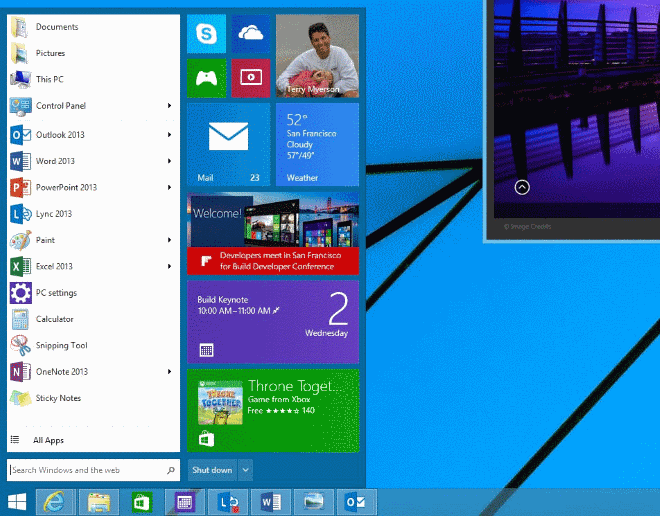 Looks familiar? That's because some start menu replacements like Start Menu Reviver are making available a similar functionality. It is not identical though, and the inclusion of live tiles may be interesting to some users who work with apps or use some like the calendar or mail as you will be informed about new notifications right in the start menu then.

Another upcoming feature is the ability to run apps in windows on the desktop. This is actually a feature that I wanted to see for a long time as it improves the usability of apps significantly.

While it may sometimes be the best choice to run apps in full screen mode or snapped to a side, most of the time it is not. Windows offer many advantages such as the option to resize them to exact dimensions. 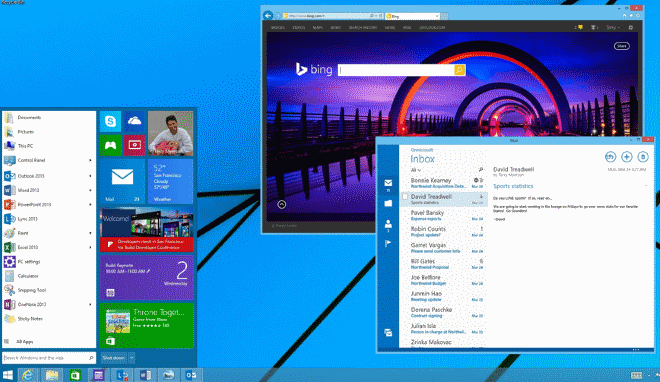 You can read more about that on Blogging Windows.

Microsoft announced .NET Native yesterday which the company states will improve the start up time of apps by 60% and reduce the memory footprint of them at the same time.

It provides developers with a set of tools to build apps across devices. You can download a developer preview of .NET Native right now.

Developers can now create unified apps that will run on phone and desktop PCs running Windows. Users who buy apps can use them on all supported devices.

There is also a new status page on the modern.ie website which highlights the features that Internet Explorer supports, will support, Microsoft considers supporting, and does not plan to add.

Martin Brinkmann is a journalist from Germany who founded Ghacks Technology News Back in 2005. He is passionate about all things tech and knows the Internet and computers like the back of his hand. You can follow Martin on Facebook or Twitter
View all posts by Martin Brinkmann →
Previous Post: « How to use Skype without Skype software on Outlook.com
Next Post: Microsoft updates adware criteria to the benefit of the user »