Windows 8.1: return to the desktop after you close the last Modern app - gHacks Tech News
ghacks.net

Windows 8.1: return to the desktop after you close the last Modern app

Among the changes are an option to load the desktop right away after sign on, and the new start menu button which, while basic in nature, adds a visual component to the Windows-X menu that Microsoft introduced in Windows 8.

Windows 8.1 has been out for select testers and MSDN and TechNet subscribers only at this point, with the update being released to all users later this month.

A revised feature in Windows 8.1 changes what is happening after you close the last application on the Start screen. 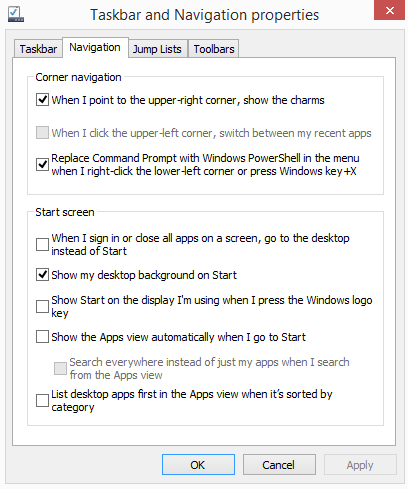 Previously, you stayed on the start screen no matter what. The new update brings the option to switch to the Windows desktop instead, a useful option for Windows 8 users who spend most of the time on the desktop but launch the occasional app on the system.

This is also helpful for situations where an app is loaded by accident, for instance if it is the default application associated with a file type on the system.Sometimes, users may want files to be opened in an app instead of a desktop application.

The Photo application is for instance linked to image formats by default. When you double-click on images in File Explorer, Windows 8.1 will display them in the photo viewer app of the system. Instead of having to haggle your way back to the desktop, you simply get there when the app is closed.

The option is not enabled by default. To enable it, you need to perform the following operation:

You can disable it at any time by removing the check mark from the box again.

The preference combines the boot to desktop feature that Microsoft integrated in the Windows 8.1 preview releases with the option to go to the desktop instead of Start.

This can be a issue for some users, as you either get both "to-desktop" features or none due to the merged nature of the preference.

The change is another improvement that Microsoft has integrated into Windows 8.1 that makes life easier for desktop / non-touch users. (via McAkins)

Martin Brinkmann is a journalist from Germany who founded Ghacks Technology News Back in 2005. He is passionate about all things tech and knows the Internet and computers like the back of his hand. You can follow Martin on Facebook or Twitter
View all posts by Martin Brinkmann →
Previous Post: « Microsoft launches SkyDrive smart files in Windows 8.1
Next Post: Windows 7 not outpacing Windows 8 in terms of growth »