Pale Moon 24 ships with many new - and old - features

Pale Moon is one of them. The browser has been updated to version 24 recently, a major new release according to the author. What may make Pale Moon attractive to Firefox users is the fact that the developer does not follow Mozilla's lead blindly.

The author of the browser is not too fond of the Australis theme for instance that Mozilla will release soon for all Firefox users, or other changes that the organization makes to aid "the confused masses".

If you go through the release notes of this particular release, you will notice that it restores several features that Mozilla has removed from Firefox:

That's not all though what has been changed in Pale Moon 24. If you have used the browser before you may remember that it still displays HTTPS sites in special colors in the address bar. Mozilla is not doing that anymore for all types of https connections. A new change in Pale Moon 24 is that you get a red shading now on sites with mixed contents (meaning a HTTPS site that makes HTTP connections).

The author has updated other features, enabled the Gecko 24.0 code base, added security fixes, and improvements to the browser's performance in general.

The developer has removed Tab Groups or Panorama from the browser for example. Panorama was a feature that Mozilla had lots of hope for, but it did not really catch on. Instead of just removing the feature, an add-on has been created that users who liked the feature can install to get the functionality back in Pale Moon.

Tip: You can migrate your existing Firefox profile to Pale Moon. It is necessary that you download the Pale Moon profile migration tool and run it. It has a couple of limitations, incompatibility with portable Firefox versions or that you can only migrate the default profile locations.

Pale Moon performs as well as Firefox in most benchmarks with the usual variation in results that you get that do not really matter that much.

You are probably wondering what the catch is. There are a couple. First, updates to Firefox do not find their way to Pale Moon instantly. You will have to wait for them to be added to the browser due to the available resources the developer has at his disposal. That's a problem in regards to security updates.

Second, Pale Moon is only available for Windows. If you are running Linux or Mac OS X, you are out of luck.

Pale Moon is an excellent alternative to Firefox, for Firefox users who want to keep using their browser extensions but do not really like where Mozilla is headed. While it is possible to install add-ons to get back functionality that Mozilla removed from the browser, some users may prefer to use a product where they do not have to do so in first place. 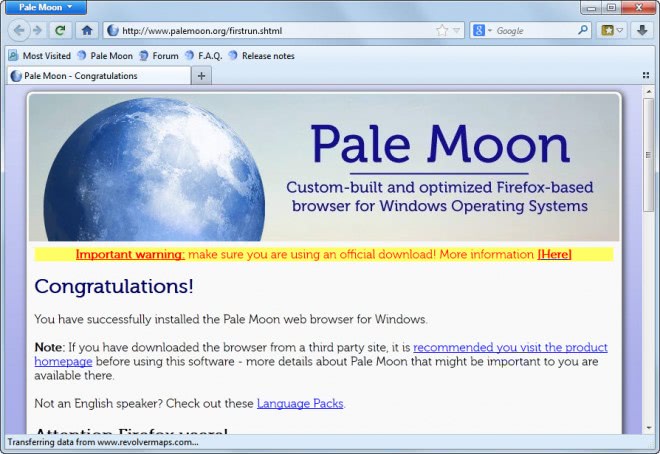